A Deathsworn Pack, known informally as the "Black Cull," was a unique, elite specialist infantry unit utilised exclusively by the Space Wolves Legion during the Great Crusade and Horus Heresy eras during the late 30th and early 31st Millennia.

Some warriors born from the genetic deficiencies of the Space Wolves' gene-seed found their minds filled with an all-consuming impulse to kill and kill again.

These dark, afflicted souls were attracted to a particular sub-cult of the Fenrisian mythos centred around the wolf-spirit Morkai, a pseudo-deity of death and the dead. Those who followed the Cult of Morkai were gathered together into a specialist infantry unit known as the Deathsworn.

The Space Wolves who were attracted to this cult were said to be those who most "felt the breath of the wolf in their bones" and within them the fiery passions of their brethren had chilled to a bleak killing frost and only the prospect of immediate bloodshed could bestir them with feeling once more.

Many such warriors who were attracted to this cult were drawn together to form the Packs of the Black Cull, an extermination corps which also specialised in near-suicidal and all-but-unstoppable line breaker attacks, embracing the touch of death as one might a lost friend.

The Deathsworn were the dark heart of the VI Legion and theirs was a curse that was eventually to find its vent in the transfiguration of the flesh. But long before the first "Wulfen" emerged its predatory taint was found within the minds of those born of the Space Wolves' gene-seed.

In every Legion it was said there were those for who the horrors of all they had witnessed and all the bloody deeds they had done in the name of the Great Crusade mutilated their soul and damaged their minds to such an extent that they were no longer men, no longer Space Marines in truth, but something hollow and murderous beyond reason.

In some Legions, such things might go all but unnoticed, even perhaps mark one for advancement, while in others, the gift of final peace was offered, or perhaps outcast status as one of the so-called "Moritat" or a place in the Destroyer units.

But within the Space Wolves, such an all-consuming impulse to kill and kill again was better understood, and the ways of Fenris held the answer to such dark souls in the shape of the Cult of Morkai and its ministers, who ensured that the jaws of the Death Wolf could feast upon the enemies of Mankind with proper reverence.

The warriors who gave themselves over became the Deathsworn; marked by their wolf-skull helms, they were the embodiment of the hunger of death in the heart of the VI Legion.

The dreams of the Death Wolf consumed the minds of the Deathsworn so that only in killing did they themselves feel anything but the chill of death closing about them. In that moment they cared nothing for their own lives or safety, so long as their enemies were strewn about them broken and lifeless.

For every 5 Deathsworn, 1 may take one of the following options instead of those previously listed:

The entire squad may take one of the following: 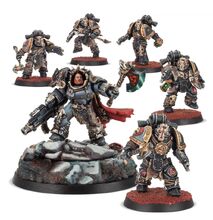 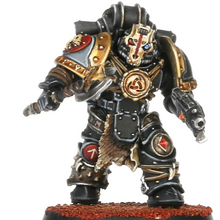 A Space Wolves Legionary of a Deathsworn Pack. 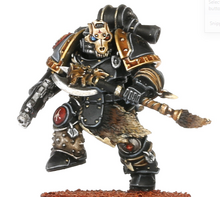 A Space Wolves Legionary of the Deathsworn Pack charging into battle. 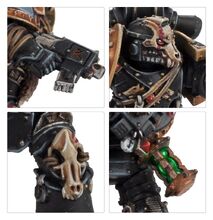 A close-up view detailing the unique weapons and wargear utilised by Deathsworn Packs.
Add a photo to this gallery
Retrieved from "https://warhammer40k.fandom.com/wiki/Deathsworn_Pack?oldid=352287"
Community content is available under CC-BY-SA unless otherwise noted.