A Drop Pod is a one-way, sealed, armoured landing craft that is launched from an orbiting voidship onto the planet below. The Drop Pod plummets through the planet's atmosphere at extreme speeds, firing powerful retro-rockets just before touchdown to rapidly slow its descent. Having made what is little more than a controlled crash landing, explosive bolts are released and the armoured doors of the pod open, allowing the enclosed Space Marines to deploy.

The Deathstorm Drop Pod is a heavy support variant of the standard Drop Pod, featuring internal weapons systems that deploy upon impact with the ground, and it makes up for the principal disadvantage of any Drop Pod used by the Imperium -- the inability to transport armoured vehicles such as Predators or Vindicators directly to where they are needed most.

Where internal seating and support harnesses are found in the infantry pods, the internal space of a Deathstorm is wholly dedicated to transporting either a series of automated Deathstorm Launchers or automated Assault Cannons, and the design of the craft allows for heavy support to be immediately transported to the battlefield with the minimum of delay.

Once a Deathstorm Drop Pod has touched down and its assault ramps have slammed open, the weapons within will open fire on anything outside of the craft. These weapons will only fire in the direction of the ramp they are positioned at and will strafe the immediate area with weapons fire until their ammunition is completely expended.

The weapons carried by a Deathstorm Drop Pod do not possess any auto-targeting capabilities and will fire indiscriminately at the area around them until all ammunition is expended. By this time further Drop Pods carrying Space Marine assault forces will themselves have begun landing in standard Drop Pods and started disgorging Astartes onto the battlefield to face any enemies that survived the onslaught unleashed by the Deathstorm Drop Pod.

The Deathstorm's automated weapon systems do not fire blindly, however, as this would simply be a waste of time and ammunition. They are instead slaved to a basic Cogitator unit that instructs the weapon's Machine Spirit (artificial intelligence) in target selection.

Although the weapons are capable of firing upon these selected targets, there is no discrimination between friendly units and the enemy. Once the battle its over, Chapter Techmarines will recover any surviving pod and have it repaired and rearmed for the next battle.

Deathstorm Drop Pods were first conceived and prototyped by the Raven Guard Legion during the Great Crusade, who sought to augment the firepower of their precision-orbital assaults. The Raven Guard's preference for such surgical-strike tactics would, upon occasion, leave them at a disadvantage in the case of both protracted engagements and in assaulting very heavily fortified targets where heavy units such as Legion tanks and artillery could not be used.

This opened the Legion up to levels of casualties during some successful Drop Pod assaults that their Primarch Corax would not countenance. The Raven Guard's solution spoke much to their own nature and preferred tactics -- a weapon that would strike with merciless swiftness and expend its force in a lethal fury that left little need for prolonged endurance.

The Deathstorm Launcher could be outfitted with either fragmentation or Krak warheads. This enabled the Deathstorm to blast an area in a massive volley of fire upon landing, clearing the way for the Space Marines to assault in their wake.

The Machine Spirit-targeted weapons of the Deathstorm would then continue to sweep the landing zone and provide fire support, although at much reduced firepower, the bulk of their ammunition already expended on their arrival.

The Deathstorm Drop Pod replaces the interior seating and restraints of the standard Drop Pod with a set of five automated weapon systems, known as a Deathstorm Missile Array or a Deathstorm Cannon Array. These weapons are slave-linked to an onboard Cogitator unit that directs their Machine Spirits (artificial intelligences) to fire upon any target within their range, friend or enemy, until their ammunition is expended.

A standard Deathstorm Drop Pod is armed and equipped with:

A Deathstorm Drop Pod can replace its standard Deathstorm Missile Array with the following:

During the Great Crusade and Horus Heresy the Deathstorm Drop Pods of the Legiones Astartes featured different loadout options than those still found during the 41st Millennium.

A standard Legion Deathstorm Drop Pod is armed and equipped with:

A Legion Deathstorm Drop Pod can replace its standard Deathstorm Launcher System loaded with Frag munitions with the following:

The following are all known formations that make use of Deathstorm Drop Pods:

There are several variants of the Deathstorm Drop Pod used by the Imperium:

The Deathstorm Drop Pod was originally known as the Deathwind Drop Pod, and featured nearly the same armament and model. The name was changed to Deathstorm with the release of the Imperial Armour Volume 2 Rules Update (ver. 1.1) by Forge World.

No reason for the change was given in the update; however, it may be that the standard Drop Pod model and rules by Games Workshop could be armed with a Deathwind Missile Launcher in place of its Storm Bolter, which is a smaller weapon than needed for a Heavy Support unit, and as such the name was changed and the weapon altered to a Whirlwind Launcher to better reflect that the Deathstorm was meant to possess heavy firepower. 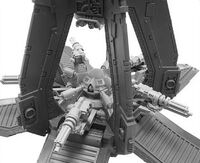 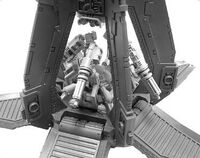 A close-up of a Deathstorm Drop Pod armed with five automated Assault Cannons; the Assault Cannons have powered down after using their entire supply of ammunition 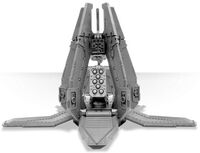 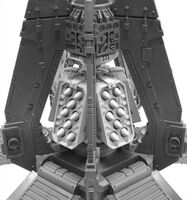 A close-up of a Deathstorm Drop Pod armed with five automated Deathstorm Launchers
Add a photo to this gallery
Retrieved from "https://warhammer40k.fandom.com/wiki/Deathstorm_Drop_Pod?oldid=352072"
Community content is available under CC-BY-SA unless otherwise noted.