The Deathshroud wore Artificer-crafted Cataphractii Pattern Terminator Armour of the highest quality, which presented a foreboding appearance. Like their Primarch, each member of the Deathshroud wielded a large Power Scythe known as a Manreaper. It was the Deathshroud's sacred duty to never stray more than forty-nine paces from Mortarion. Two Deathshroud guardians customarily escorted the Primarch at any given time, though there may have been more hidden in the shadows. These stoic warriors' presence was quite intimidating as when not in motion they would stand uniformly at attention, still as statues. But in battle they were equally frightening, for whatever the odds, they always moved inexorably towards their target, as unerring as the automated killing machines employed by the Legio Cybernetica. Their fate after the end of the Horus Heresy remains unknown. 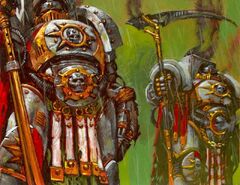 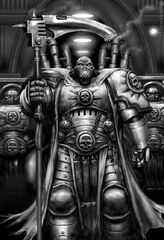 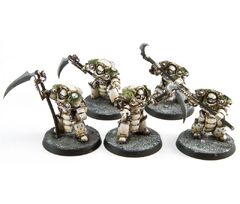 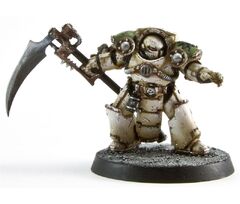 Deathshroud Power Scythe, known as a "man-reaper"
Add a photo to this gallery
Retrieved from "https://warhammer40k.fandom.com/wiki/Deathshroud?oldid=226253"
Community content is available under CC-BY-SA unless otherwise noted.
FandomShop DC Trivia GalaxyQuest