A Death Wheel is a rare Daemon Engine utilised by the forces of Chaos.

During the 13th Black Crusade, the Defiler was a more common sight upon the battlefields of Cadia. But perhaps the most terrifying of Abaddon's daemonic constructions was the mighty Death Wheel. Standing as tall as a Warhound Scout Titan, these massive, tracked wheels are festooned with baroque spikes, guns and blades.

Death Wheels were first encountered by the Cadian 8th Regiment of the Astra Militarum near Kasr Vasan when a large force of Black Legion armour accompanied by several Death Wheels forced the Cadians to disengage their pursuit of the traitorous Volscani Cataphracts.

The Death Wheel is massive, rising several stories above the battlefield, and covered in large deadly spikes and blades. Inside the Death Wheel is a gyroscope, allowing it to keep its balance without relying on sheer gravity alone. In addition to the spikes, the Death Wheel is equipped with a pair of large Battle Cannons as its main armament.

It is a formidable weapon that can deal significant damage from a long distance against both vehicle and infantry targets. It is also equipped with a pair of deadly Reaper Autocannons on both sides, which are capable of a high rate of fire, and is highly effective as an anti-personnel weapon. 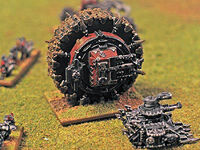 A Death Wheel of the Emperor's Children Traitor Legion (Side View).

A Death Wheel of the Emperor's Children (Front View).

A Death Wheel of the Emperor's Children (Oblique View).