The Death Strike is a Codex Astartes-compliant Loyalist Space Marine Chapter of unknown Founding that is a Successor Chapter of the Imperial Fists. The Chapter's fortress-monastery is located on its homeworld of Nihilas. This Chapter is one of several tied to the genetic legacy of Rogal Dorn that competes in the Feast of Blades. The Death Strike is very similar in appearance to the controversial Rainbow Warriors Chapter first revealed in the original Warhammer 40,000 rule book Rogue Trader. The main difference is that the Rainbow Warriors' Chapter badge is white, and their helmet stripe is multicoloured like a rainbow instead of being yellow.

The Death Strike's Chapter badge is a yellow, winged lightning bolt on a field of dark blue. 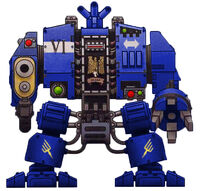