A Death Korps Engineer is a specialist in siege warfare techniques who serves in the Imperial Guard regiments of the Death Korps of Krieg that hail from the devastated, post-apocalyptic Death World of Krieg. Death Korps Engineers are infantrymen who specialise in the techniques required to wage subterranean warfare, including digging shafts, tunnels and extensive trenchworks intended to undermine a heavily fortified enemy's strong points and to allow Krieg regiments to launch surprise raids behind enemy lines.

Squads of Krieg Engineers often carry a lot of highly technical equipment into battle, such as geo-thermic Auspexes, surveyors, Breaching Torpedoes and Melta-charges, as well as equipment that can be used by hand to dig or extend subterranean fortifications. They also have access to heavier cutting equipment for boring deep tunnels and mines and even a Mole Launcher which is a special type of Missile Launcher that fires burrowing torpedoes that are capable of digging through enemy obstacles and detonating on the other side.

Krieg Engineers are first and foremost soldiers, but they are also skilled miners and sappers, capable of digging forward from the frontlines with deep shafts to bypass enemy defences, setting large explosive mines below enemy positions or digging sap trenches. Saps are shallow tunnels which are dug to just below the surface, allowing a squad to blow an entrance to the surface and quickly assault an enemy position without crossing the deadly no-man's land between the Imperial and enemy lines. Engineers are also trained and authorised to use chemical weaponry. If required, they carry small gas canister grenades, which are used during assaults to shroud the enemy in highly corrosive and toxic gas. These are weapons of last resort, but have helped to give Krieg regiments their ruthless reputation.

The realm of underground warfare is brutal and merciless, with each Engineer facing the possibility of a slow lingering death trapped underground by an enemy counter-mine or a furious and bloody close assault when tunnels collide. Casualties are always very high in the confined conditions of tunnels. Engineers use a specialised Missile Launcher that fires a form of explosive charge known as a Breaching Torpedo that is known to the common Krieg soldier as a "Mole Launcher." The torpedo itself is an advanced weapon that carries a powerful drill in its nose that enables it to burrow through rock and earth. A Breaching Torpedo is also outfitted with a small Power Field emitter which lets the torpedo slice through rock very quickly, and a guidance system, linked to the Engineer squad's control panel, which is used to manually guide the torpedo to its target. Once the target is located, the torpedo burrows up to the surface and explodes, allowing the Death Korps to unleash surprise attacks from beneath a vulnerable enemy-held bunker or building. The Mole Launcher can also be used to blast an opening into an enemy tunnel or trenchwork and cause a sudden, catastrophic collapse.

Krieg Engineer uniforms are a modified version of the standard infantry uniform utilised by the Guardsmen of the Death Korps. The long overcoat is discarded in favour of a short tunic jacket to reduce encumbrance and aid mobility when operating in the very confined space of tunnels. The trousers, leg bindings and boots remain standard issue. The uniform is designed to protect its wearer against both chemical and biological attacks. Like Death Korps Grenadiers, Death Korps Engineers wear distinctive heavy Carapace Armour to improve survivability when in close combat with the enemy. The armour makes use of the standard issue Mark IX helmet, rebreather mask, shoulder guards, breastplate and additional abdomen plates. The standard Krieg uniform shin guards are not used, and are replaced by kneepads, as most engineering work must be done crouching or kneeling within the tunnels of a Krieg trenchwork. Each breastplate mounts a powerful flashlight for use whilst working in the darkness.

All engineers carry the Lucius Pattern Mark 22c semi-automatic Shotgun as their standard weapon. This weapon has an eight round revolving magazine, uses a gas-operated self-loading action to fire and can be loaded with a variety of ammunition, including solid slugs, pellet loaded canisters and low velocity flares. The revolver action is prone to mechanical failure, but the weapon's high gauge and the heavy cartridge fired make it a deadly weapon at close quarters, although it is infamous for its ferocious recoil. In the dark, confined space of trenchwork tunnels this weapon's short range and inherent inaccuracy is not a major drawback, and its hitting power at a very short range makes it useful for Engineers, whose fire fights are typically short and lethal. The shotgun's wide area of effect means it can be used to sweep a tunnel clear and potentially hit multiple opponents in a single blast.

Although shotguns do not have a bayonet lug, most engineers still carry a sword bayonet. This long knife makes a fine close combat weapon as it is almost the length of a short sword and can prove very useful in the tight space of a tunnel. All Engineers also carry Frag and Krak Grenades as part of their standard kit and are trained in the use of other special weapons such as Melta-bombs, demolition charges and chemical warfare agents.

In order to fulfill their specialist role, Krieg Engineers have access to many pieces of specialised equipment for working underground. As well as carrying hand-held digging equipment, they also have access to larger machines for heavy cutting and boring. One such machine is the fearsome Hades Breaching Drill. The Hades Drill is equipped with a forward-firing Melta-Cutter that can turn rock and metal into molten slag in seconds. Its massive drilling blades are tipped with Diamantine and can easily cut through most materials, be it rock, metal, or even flesh. While the Hades is normally used for mining operations on Imperial Mining Worlds, when it is deployed as a siege weapon it can not only be used as a breaching drill but also to attack the enemy from underground. During a prolonged siege, Krieg Engineers may spend weeks or even months digging tunnels and saps towards and around the enemy lines. The Hades will then be used to quickly breach the last few yards until it hits the surface, where Engineers and other specialised Krieg units, such as the Death Korps Grenadiers, will come through the breach and assault the enemy. While the Hades Drill is on the surface it is not completely useless in combat, as its Melta-Cutter and drill blades are capable of ripping apart enemy structures and even tanks. The Hades can even be turned on enemy infantry and used as a makeshift tank in dire circumstances. 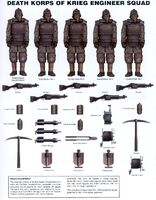 A Death Korps of Krieg Engineer Squad Order of Battle
Add a photo to this gallery
Retrieved from "https://warhammer40k.fandom.com/wiki/Death_Korps_Engineer?oldid=298023"
Community content is available under CC-BY-SA unless otherwise noted.