Death Company Dreadnoughts differ from standard Imperial Dreadnoughts in that their occupants are Astartes that are suffering from the Blood Angels' genetic flaw known as their Black Rage. The Black Rage is a genetic flaw that creates mental instability as a result of the psychic imprint left within the Blood Angels Legion's gene-seed by their Primarch Sanguinius' death.

This flaw was first discovered during the Battle of Signus Prime when Sanguinius was struck down and delivered a terrible wound by the Bloodthirster Greater Daemon Ka'Bandha. The condition is largely irrecoverable and only a few Blood Angels have managed to defeat this so-called "gene curse".

When a Space Marine is overcome by the Black Rage he is reborn into a world of constant anger, hatred and blind fury that cannot be contained and will lead to the slaughter of any who get in the enraged Astartes' way, whether they be friend or foe. As well as Sanguinius' memories, the Blood Angels and their kin are genetically gifted with a small portion of their Primarch's unearthly power, boosting their strength and vitality to superhuman levels.

The Chapter's Sanguinary Priests can then judge whether or not the Dreadnought's Astartes occupant should be sedated until the next battle or relieved of his life so that another may take his place. If the occupant of the Dreadnought chassis is still sane enough to follow direction, he will be moved to the Chapter's Death Company, where his Dreadnought body will be able to withstand tremendous amounts of punishment and his unending rage will result in the deaths of many foes before his own destruction.

Many Blood Angels Successor Chapters that make use of Death Company Dreadnoughts will deploy them into battle using Dreadnought Drop Pods that drop the war-machine right into the heart of the enemy's battle line, allowing the Dreadnought's unstoppable might to be used for maximum effect.

Death Company Dreadnoughts are rarely ever armed with conventional long-range Dreadnought weaponry, as the Dreadnought would only use it until it is close enough to the enemy to engage in melee where these weapons are much less effective than dedicated close combat weaponry.

Death Company Dreadnoughts are commonly armed with two Bloodfists, a variant of the Dreadnought Powerfist that is used exclusively by the Blood Angels and their Successor Chapters. These weapons are outfitted with an under-slung Storm Bolter on one arm and an under-slung Meltagun on the other. The Dreadnought's Storm Bolter can also be switched out for a Heavy Flamer for greater close combat firepower. Both of the walker's Bloodfists can be replaced with a pair of Blood Talons.

Blood Talons are a variant of the uncommon Dreadnought Lightning Claw used by several Astartes Chapters. Like Bloodfists, Blood Talons are used exclusively by the Blood Angels and their Successor Chapters.

Death Company Dreadnoughts are only able to be armed with a single, non-close-range weapon, the mighty Magna-Grapple. The Magna-Grapple is a weapon used exclusively by the Blood Angels and their Successor Chapters, and can fire several yards of tempered adamantium chain attached to powerful magnetic and gravitic field generators. When fired at an enemy vehicle, the Magna-Grapple's chains form an unyielding bond with the enemy vehicle's hull, allowing the Dreadnought to pull the vehicle in closer to finish it off with its main close combat weapon. 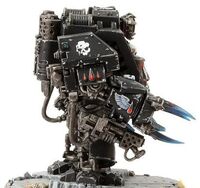