Simple zealotry is not enough to recommend a Blood Angels Chaplain for elevation to the rank of Death Company Chaplain. Rage and hatred are useful tools, but they are nothing without control. The role of the Death Company Chaplain is much more complex, and more sacred, than simply inciting his brothers to new heights of wrath in battle. This deeply spiritual warrior acts as the light of the Angel himself, a guiding illumination that those brothers lost to the Black Rage can follow into glory and death. He is a beacon of sanity, the eye of a bloody storm, and the last sight that many of his luckless foes will set eyes upon before their savage demise. 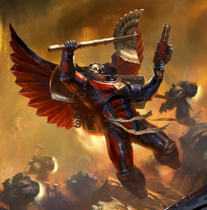 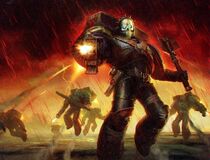 Chaplain Lemartes, Warden of the Lost, leading his afflicted brothers in battle
Add a photo to this gallery
Retrieved from "https://warhammer40k.fandom.com/wiki/Death_Company_Chaplain?oldid=292488"
Community content is available under CC-BY-SA unless otherwise noted.