A Dark Talon, also known as a Ravenwing Dark Talon, is a variant atmospheric fighter used only by the Space Marines of the Dark Angels and their Unforgiven Successor Chapters. A formidable weapon employed by the Dark Angels' elite 2nd Company, known as the Ravenwing, the Dark Talon is flying death, a veritable grim reaper of the skies.

The enemies of the Imperium have learned to fear its distinctive silhouette, for it carries a mighty arsenal, raining death upon its foes with righteous vengeance. The Dark Talon is capable of flight in the void, but only for short trips, usually when deploying from an orbiting warship or The Rock itself. It has little combat capability outside of a planetary atmosphere.

The Ravenwing Dark Talon is perhaps the deadliest weapon in the Ravenwing's arsenal, and it plays a pivotal role in the 2nd Company's eternal hunt for the Fallen. A strange and ominous-looking craft, this atmospheric fighter is topped with sepulchre-like spires and half-covered in a Gothic facade. Flying low, the Dark Talon follows the contours of surrounding terrain. Utilising its ground-facing boost jets, the Dark Talon can literally hang in the air, hovering above its victims like some black bird of prey. The Dark Talon attacks in two ways; it is armed to provide direct air support to allies on the ground with an underslung racked Hurricane Bolter, one under each of its blunt wings.

The Dark Talon also carries a single bomb. It is able to accelerate on bombing runs, delivering its strange payload to its marked quarry. This archaic weapon first developed during the Dark Age of Technology is an ancient device known as a Stasis Bomb, the blast from which causes a degree of heat damage but, more importantly, momentarily halts the flow of time through the use of an unknown technology. This unnatural disruption to the space-time continuum causes gut-wrenching disorientation and slows the reaction times of those caught within the proximity of the blast. Situated in the nose of the aircraft is the Dark Talon's most awe-inspiring weapon. The Rift Cannon, sometimes referred to as the Stained Glass Cannon, is a weapon developed at the zenith of Mankind's technological achievement and hubris long before the Emperor first reigned upon Terra. When fired, it emits a beam of Warp energy that emerges with a cascade of scintillating colours that explode into a blossom of oblivion as a small rift into the Immaterium is opened at the beam's point of contact.

In addition to its mighty arsenal, the Dark Talon carries a stasis-crypt holding cell where the Dark Angels' captives are loaded so that they might be ferried up to the orbital fleet and, ultimately, to the dungeons of The Rock and the attentions of the awaiting Interrogator-Chaplains. The Fallen fear this fate more than any other, for that last ascension leads not to redemption, but only to great pain and death.

The Ravenwing Dark Talon is armed with two wing-mounted Hurricane Bolters, one under each wing, a powerful ventral-mounted Rift Cannon, and has a single hardpoint for carrying an arcane Stasis Bomb.

A standard Ravenwing Dark Talon is armed and equipped with:

The following are a list of known formation that include the Ravenwing Dark Talon:

No technical specifications for this aircraft have been released publicly by the Adeptus Mechanicus at this time. 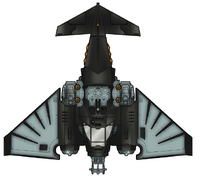