Quartered Dark Green and White
The Dark Sons is a Loyalist Space Marine Chapter of unknown Founding created from the lineage of the vaunted Ultramarines Chapter.

Along with the Angels of Fury, the Dark Sons had the honour of being under the tutelage of the venerable Novamarines Chapter following their inception.

The Dark Sons' homeworld is the planet Darkhold in the Segmentum Obscurus.

A certain spectre of pridefulness and egotism clings to these warriors and has soured their dealings with other Imperial organisations in the past, but their arrogance is not undeserved.

The Dark Sons fight with remarkable efficiency and skill, and have won countless battles against remarkable odds.

The Dark Sons' Power Armour is quartered dark green and white. The Aquila or Imperialis on the chest plate is golden.

The Dark Sons' Chapter badge is a stylised green-, open-faced, twelve-pointed star with a circle of the same tone of green in the centre, on a field of white. 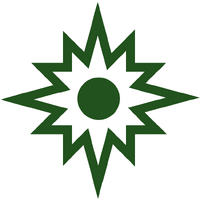 Dark Sons Chapter Iconography
Add a photo to this gallery
Retrieved from "https://warhammer40k.fandom.com/wiki/Dark_Sons?oldid=352620"
Community content is available under CC-BY-SA unless otherwise noted.