The Dark Hands is a Loyalist Codex Astartes-compliant Space Marines Chapter of unknown Founding and origin.

The Dark Hands' Chapter badge is a stylised outstretched black, armoured hand facing the viewer as if in a halt gesture, on a field of dull mint-green. 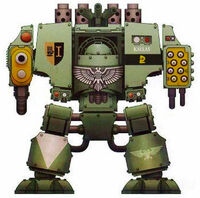 Dark Hands Thunderhawk Gunship of the elite 1st Company
Add a photo to this gallery
Retrieved from "https://warhammer40k.fandom.com/wiki/Dark_Hands?oldid=302214"
Community content is available under CC-BY-SA unless otherwise noted.