The Damocles Command Rhino is a variant of the standard Rhino used by all Space Marine Chapters. The Damocles is used as a command vehicle during large-scale military operations, and acts as the main communications link between all Space Marine ground forces and the orbiting Astartes fleet assets.

The Damocles is a good example of the kinds of advanced Imperial technology that the Space Marines are given access to, and it is equipped with unusually sophisticated communications and tracking equipment.

The Damocles is primarily deployed only during large-scale planetary assault operations that involve either entire companies or multiple companies of Space Marines serving alongside other Imperial forces.

During the Great Crusade era, the Ultramarines Legion armoured forces included a wide range of vehicle classes, patterns and types, including the very earliest patterns of war machines which were subsequently deployed in large numbers across the entire Legiones Astartes. Some of these had been kept operational by constant field repair and had not received the attentions of the Legion Forge for many solar decades.

Conversely, the Legion's forces included vehicles only just beginning to see use, one of which was the Damocles pattern command Rhino, a Deimos pattern armoured carrier modified by replacing most of its troop carrying capacity with a suite of sophisticated communications equipment.

Designed to the specifications of the ever-expanding Ultramarines Legion, the Damocles was easier both to manufacture and deploy than the venerable Proteus-Explorator Land Raider variants, which commonly fulfilled this role during the Great Crusade's early years, and less resource-intensive to forge and less marked upon the battlefield than the powerful Spartan Hermetika siege command vehicles which were entering service during the latter days before the horror of civil war encroached upon the Imperium.

The Damocles was just as able in its task, but unfortunately far less durable than either of its counterparts, being based on various patterns of the ubiquitous Rhino chassis. Following the Ultramarines' example, this command and control platform was beginning to enter service across the Legions by the close of the Great Crusade, the sons of Guilliman leading by example and sharing their hard-won battle doctrines with their brother Legions.

Equipped with sophisticated communication, cognis-analysis and tracking equipment, including a powerful orbital-interface secure vox-transceiver, the Damocles Command Rhino was designed principally as a command and control vehicle to serve as a direct and all but unbreakable link between a Space Marine Legion formation in the field and its brethren elsewhere within the war zone and in high orbit above during planetary operations.

Using these systems, skilled Techmarine crew were able to read the ebb and flow of battle, call in reinforcements and supporting fire, and ward off enemy forces through interdiction targeting.

The Damocles is not a combat vehicle and is usually unarmed. It is almost always found near the rear of any advancing force.

Each and every Damocles is crewed permanently by a driver and a two-man command team, which are part of the Chapter Master's headquarters staff. One of these Astartes is a communications controller and the other is an operations controller who monitors all squads, tracks their positions, and the enemy's movements.

Each of these brothers, including the driver, is a full Space Marine in his own right, but they all receive additional training by the Chapter's Techmarines to use the sophisticated equipment.

There is also a seat inside the vehicle for the Space Marine Force Commander, alongside the driver, and while many commanders prefer to lead from the front they are able to make use of the Damocles between battles in order to keep up to date with the developing strategic situation.

A standard Damocles Command Rhino is armed and equipped with:

The Damocles Command Rhino may also have a variety of vehicle equipment such as:

The Damocles is full of special command, control and communications technologies, such as:

The Damocles can also be outfitted with several upgrades that are common to the Rhino chassis, such as a Dozer Blade, Extra Armour Plating, a Pintle-mounted Storm Bolter, a Hunter-Killer Missile Launcher, a Searchlight, and Smoke Launchers.

A Damocles Command Vehicles of the Marauders Chapter. This was the command vehicle of the Thracian Response Force; note the pintle-mounted Storm Bolter for close defence.

Damocles Command Vehicles of the Raptors Chapter. This vehicle bears desert camouflage and the crowned skull campaign badge of the Angelis Campaign. The winged skull symbol on the door is used to denote a command unit.

A Damocles Command Rhino of the Raptors Chapter's 2nd Company

Damocles Command Vehicle of White Consuls Chapter, 5th Company. Part of the Chapter's commitment to the defence of the Cadian Gate against the 13th Black Crusade. As a member of the Astartes Praeses, the entire Chapter was committed to the battle.

A Damocles Command Rhino of the Minotaurs Chapter, this vehicle was lost on Amarah Prime during the Orphean War against the Necrons 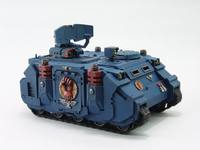 A Damocles Command Rhino belonging to the Crimson Fists Chapter 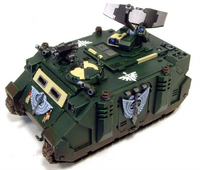 A Damocles Command Rhino belonging to the Dark Angels Chapter 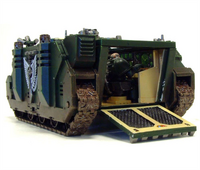 The interior of a Damocles belonging to the Dark Angels Chapter