The Daggerfangs is a warband of Chaos Space Marines drawn from the Alpha Legion Traitor Legion. Led by Chaos Lord Vykus Skayle, the Daggerfangs are unlike other Alpha Legion warbands, as they are faithful devotees of the Ruinous Powers.

Like the rest of their parent Traitor Legion, the Daggerfangs still maintain the basic Alpha Legion colour scheme for their Power Armour -- blue, silver and green.

The Daggerfangs use the same Legion badge and iconography as the rest of the Alpha Legion, namely a green hydra, the mythological multi-headed serpent that has the ability to grow back two heads for every one that was cut off. 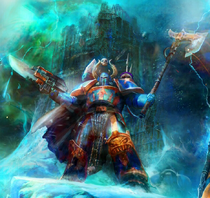 Chaos Lord Vykus Skayle
Add a photo to this gallery
Retrieved from "https://warhammer40k.fandom.com/wiki/Daggerfangs?oldid=306964"
Community content is available under CC-BY-SA unless otherwise noted.