Daenor is a notable Death Company Chaplain of the Blood Angels Space Marine Chapter. This vaunted hero and deeply spiritual warrior acts as the light of the Angel himself, a guiding illumination that those brothers lost to the Black Rage can follow into glory and death.

He is a beacon of sanity, the eye of a bloody storm, and the last sight that many of his luckless foes will set eyes upon before their savage demise.

From the bloody slaughter in the Akatrian Heights, to the hellish invasion of the Nightmare Well, Chaplain Daenor has battled his way through some of the most horrific battles in the Blood Angels' history. Never once has his composure failed him. Never once has he succumbed to the Blood Angels genetic Flaw, and this alone is enough to have seen him elevated to the rank of Death Company Chaplain.

No matter how dire the circumstances or dread the foe, Daenor's icy composure never cracks. Moreover, his deep spirituality and natural leadership qualities do much to steady the warriors around him. He is a light in the darkness, a beacon of hope and fortitude amongst the smoke-wreathed hell of the battlefield, and even the most lost of his brothers follow his lead without question.

Daenor is far more than a figurehead, of course. His skill in close combat is prodigious; even wielding his bulky Crozius Arcanum in battle, Daenor strikes and parries as quickly as any expert swordsman. It is here, in the heat of battle, that the coldly composed Chaplain reveals his true zeal.

Every strike is driven with the furious strength of utter conviction. Each thunderous blow that connects hurls another broken foe to the ground, their life smote from them in the name of the Angel and the Emperor. 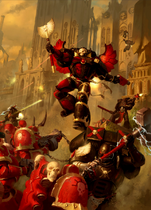 Chaplain Daenor leads his lost brothers of the Death Company in battle against the vile Crimson Slaughter Renegade Chapter on the world of Amethal, during the Diamor Campaign
Add a photo to this gallery
Retrieved from "https://warhammer40k.fandom.com/wiki/Daenor?oldid=361532"
Community content is available under CC-BY-SA unless otherwise noted.