"Can we play with him, master? He seems so unhappy. Let us help him smile. Please? Or at least let us carve one on his face when he stops screaming."

A Daemonette, also known as a "Maiden of Ecstasy," is a Lesser Daemon of Slaanesh, the Prince of Pleasure. Known as "Bringers of Joyous Degradation," "Harbingers of Endless Delights," and "Seekers of Decadence," Daemonettes are all these things and more.

Their physical appearance is confounding. At once impossibly twisted and shamefully intriguing, the hermaphroditic form of a Daemonette is both repulsive and nearly impossible for a mortal to turn away from.

In battle, Daemonettes are lithe, dexterous killers, whose claws can tear their opponents to shreds, or allure their mortal victims into their clutches.

When mounted upon the disturbingly graceful daemonic mounts known as a Steed of Slaanesh, a Daemonette is called a Seeker of Slaanesh, who form the vanguard of the Dark Prince's legions. These lithe, sensual beasts are swift and powerful and track mortals by tasting their desires on the air.

Daemonettes can gift their victims with a mixture of excruciatingly painful caresses and the most delicate and tender of killing strokes. Even in the most gruesome of conflicts, the Daemonettes smile in secret ecstasy as they go about their deadly work, delighting in the waves of emotion emanating from their enemies.

Sometimes Slaanesh is more delicate in his machinations, seeking to undermine the will of his foes, tempting them from their chosen path and removing their opposition to his cause. Slaanesh will also despatch Daemonettes to corrupt those he wishes to enslave.

Using their seductive spells, the Daemonettes whisper into the dreams and nightmares of their victims, fuelling their darkest desires with promises of glory and fulfilment.

The warriors of the Chaos Space Marines are especially susceptible to this. Many a would-be conqueror has summoned a host of Slaanesh's handmaidens in the mistaken belief they will clinch a lasting victory, only to find it is he who is the pawn, and that his actions have a terrible cost...

Daemonettes are the most numerous of Slaanesh's servants. They serve as courtiers and courtesans in his Palace of Pleasure in the Realm of Chaos, created to fulfill Slaanesh's every passing whim. They fill Slaanesh's throne room, lounging upon silken cushions, gossiping endlessly as they scheme to earn greater favour from their willful and fickle master.

The Daemonettes are also Slaanesh's warriors and messengers beyond his realm within the Eye of Terror. Slaanesh is given to extreme changes of mood and when frustrated, he lashes out with his vast legions, sending his Daemonettes to tear down everything he finds repugnant, unsubtle and crude, and replace them with artistic vistas of destruction.

In battle, Daemonettes can be seen dancing across blood-soaked ground, dead bodies forming a carpet beneath their clawed feet. Their honeyed voices are raised in joyous songs of praise to Slaanesh as they slay and maim in the name of agony and pleasure.

As children of Slaanesh's degenerate dreams, Daemonettes bring all he has to offer to the fore. Not all mortals yield to the temptations of the pleasures of the flesh; some have deeper desires that are only discovered through more deliberate probing of their wills. All Daemonettes are inherent experts in peeling away the defensive walls that shield the desires of men and women -- as well as other, more alien beings -- from discovery.

If a mortal seeks adoration, these Daemons know the words of seductive guile to speak into his ears to cause him to lower his guard. If that man wants nothing more than to be recognised above his peers, the child of malice knows how to sweetly praise him for his achievements.

There is no buried dream, no subdued ambition that a Daemonette cannot uncover and exploit. When it does, the focus of its attention is surely doomed to feel the tender caress of honeyed lips and razored claws.

The Daemonettes are Slaanesh's warriors and messengers beyond his realm, and packs of such Daemons serve as a core for many of the daemonic Legions of Excess.

Slaanesh is given to extreme changes of mood, and when frustrated he lashes out with his legions, sending his Daemonettes to tear down everything he finds repugnant, unsubtle and crude, and replace them with artistic vistas of destruction.

In battle, Daemonettes can be seen in a swift surge dancing across the blood-soaked ground, dead bodies forming a carpet beneath their feet. Their honeyed voices are raised in joyous, trilling songs of praise to Slaanesh as they slay and maim in the name of agony and pleasure.

They are swift, highly agile killers, gifting their victims with a mixture of excruciatingly painful caresses and the most delicate and tender of killing strokes. Even in the most gruesome of conflicts, the Daemonettes smile in secret ecstasy as they go about their deadly work, delighting in the raw waves of emotion emanating from their enemies.

They are vicious in the extreme, and never miss an opportunity to inflict a last twist on a foe's wounds before they can die. Indeed, Daemonettes enjoy nothing more than "playing" with their prey, such as holding up an enemy's severed limb to show the shocked victim or using their serpent-strike speed to inflict dozens of cosmetic wounds to trace rude words in their target's blood.

Each act of disfigurement and humiliation is met with shrill keening excitement by all the Daemonettes, each trying to out-perform the other in some extravagance. By doing such horrific acts they can then drink in the terror and despair, tasting the raw emotions that fill the air.

The physical appearance of Daemonettes is confounding. At once impossibly twisted and shamefully intriguing, the hermaphroditic form of a Daemonette is both repulsive and nearly impossible for a mortal to turn away from.

Their lithe bodies and entreating voices lure wayward souls to lower defences and open up to ravenous, violent consumption from the jaws and jagged claws of the Ladies of Slaanesh.

This base allure is not, however, the only temptation Daemonettes have at their disposal. Daemonettes often times appear vaguely feminine, with pale, purplish skin.

One of their arms will usually mutate at the elbow into a huge, crab-like pincer or other natural weapon. Daemons of Slaanesh often have extraordinarily long, prehensile tongues and may sport a single or multiple sets of female humanoid breasts, a particular mark of favour of the hermaphroditic Prince of Pleasure.

A Daemonette's androgynous charm is heightened by a permeating sense of beguilement. This is heightened by the strange musk that hangs about them like a cloying perfume. Yet there is something about admiring their charms that causes self-loathing amongst any who view them.

Daemonettes are possessed of a hypnotic glamour, an aura that disguises their true forms, rendering them as alluring visions of perfection.

Though their true forms are repulsive and terrifying, this supernatural power makes them appear as the ultimate beauty and object of desire in the eyes of mortals, regardless of their species, gender or morality.

None exposed to these Lesser Daemons of Slaanesh forget the tide of living sensuality; it evokes both loathing and a perverse longing that forever gnaws at the minds of those who see them.

Their legs end in bird-like three-talon claws, and they may have long scything limbs in place of one or both arms. They are quick, attractive, and fearsome.

More recent encounters between the Imperium and the Daemonettes have seen these Daemons' appearance changed -- they now appear more closely to be female, with writhing, tentacle-like hair.

Rather than the crablike claws of old, their talons are sickle-shaped, and as a whole, they appear far more attractive and seductive than their previous counterparts, so much so that there are tales of soldiers refusing to fight when they catch a glimpse of their alluring beauty.

"This way sisters! There's the prey! I love it when they run."


— Sheee'la'sar, leader of the Hunt

Seekers of Slaanesh are a deadly combination of beauty, claw, and passion which rides at the vanguard of many Slaaneshi daemonic legions, sweeping away opposing scouts and other light resistance.

Some who stand in the path of Seekers are spared destruction and are allowed to join the armies of the Dark Prince, if they show the proper appreciation and desire.

These swift and powerful creatures possess swollen sensoriums that are utilised to taste fear, joy or lust on the breeze from a mile away, in order to track down their mortal victims.

The Steeds of Slaanesh that the Seekers ride upon use their long, prehensile tongues to dart out and ensnare their victims, shuddering in delight as they taste the mortals' souls.

Before the terrified morsel can struggle free, they are dragged towards the daemonic beasts and their riders, whose fanged smiles and curving claws welcome them to an agonising oblivion.

The more privileged a Daemonette is -- the more she pleases the Dark Prince -- the closer to his throne she is allowed to approach. The most favoured Daemonettes are his handmaidens, fastest and most deadly of Slaanesh's courtesans.

Also known as the Heralds of Slaanesh, these Daemons are allowed on to Slaanesh's dais to feed him sweetmeats and stroke his androgynous body with their oiled claws.

It is to these depraved creatures that Slaanesh entrusts his more subtle machinations, for his Greater Daemons are created primarily for excessive violence, rather than the delicacy that the Dark Prince's ploys require on occasion.

So it is that a Herald of Slaanesh leads the Dark Prince's followers in the ongoing dance, using her seductive spells to corrupt her foes and inspiring them to give in to their deepest needs.

With promises of glory and self-fulfillment, the Herald twists the aspirations and ambitions of her prey into self-obsession, paranoia and madness, luring the victim into the indulgent road towards self-destruction and the furtherance of the Dark Prince's desires. 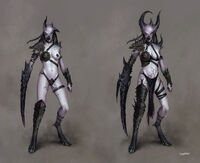 A Daemonette of Slaanesh in one of its many myriad forms.

A Daemonette displaying its terrifying yet alluring form. 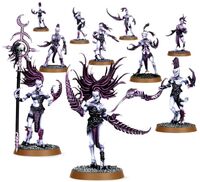 A large retinue of Daemonettes.

A retinue of Daemonettes march forth into battle.

An illustrated example of a Daemonette of Slaanesh encountered during the Horus Heresy. 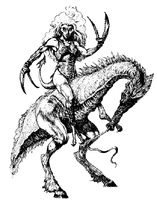 An ancient Ordo Malleus sketch of a Seeker of Slaanesh. 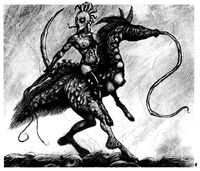 Another ancient Ordo Malleus sketch of a Seeker of Slaanesh.

A sketch of a Daemonette. 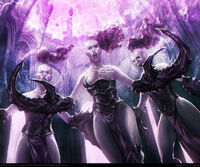 The Chorus of Daemonettes.