"The power of Humanity is nothing compared to the gifts of the Warp; any who deny this are blind to the torment and death that awaits them as a price of their blindness."

— From the Proclamation of Khazant delivered by Dark Apostle Bellephrades

A Daemon Prince is a human Champion of Chaos who has been elevated to daemonhood as a reward for his or her actions on the behalf of one of the major Chaos Gods or by the will of Chaos Undivided. Daemon Princes have chosen to trade their humanity for the god-like power and immortality of a creature of the Warp. A Daemon Prince is a living extension of the force of Chaos. To ascend to the rank of Daemon Prince is the ultimate goal of the most powerful followers of Chaos, as it gives them immortality and power beyond the reckoning of mortals. Daemon Princes combine the brute strength of daemons with the combat skill and tactical acumen of Space Marines. However, if the Champion fails in the eyes of their God, their lives and ambitions end as they are cast aside and instead descend into the mutant state of a Chaos Spawn. Since Daemon Princes have been transformed into semi-autonomous extensions of the Chaos God they serve or of Chaos Undivided, they are now entities of the Warp and can never truly be killed in the material universe, only banished into the Immaterium for a specific amount of time, usually 1,000 standard years. Essentially, Daemon Princes will exist for as long as Chaos is a force in the universe.

In order to attract the attention of their patrons amongst the Ruinous Powers, Champions of Chaos are required to achieve dark and terrible ends. They willingly sacrifice both foes and friends in service to their ambition for power and willingly risk their lives at the hands of both the enemies of Chaos and their own fickle masters, who do not suffer failure gladly. Few Chaos Champions avoid either death, or the mutation into Chaos Spawn that awaits all those mortal servants of Chaos who fail their dark patrons. Those who succeed at the tasks set for them by the Ruinous Powers are transformed into immortal entities of the Warp. They leave all the trappings of mortality and simple human feelings far behind. Daemon Princes are incredibly powerful entities of the Warp, vast and nightmarish beings whose essence is the immortal hellstuff of the Immaterium given form. No two Daemon Princes are truly alike, although many maintain a roughly humanoid shape when incarnate in the material realm. Their exact forms are fashioned from congealed horror and marked with the signs and stigmata of whichever great Chaos God they ultimately serve.

While Daemon Princes come in as wide a variety of shapes and sizes as there are facets of Chaos, most are massive beings composed of hulking muscle and thick sinew, displaying traditionally daemonic characteristics like horns and bat-like wings. All Daemon Princes wield potent sorcerous powers that originate in the Warp's psychic energies, and that are representative of the sphere of influence of the Daemon Prince's patron Chaos God. What little that a Daemon Prince retains of his or her humanity is usually only the caustic ambition and ruthless cunning which helped them earn their Chaotic reward in the first place. In the 41st Millennium, most of the Daemon Princes known to the Imperium hail from the ranks of the Chaos Space Marines, as these often ancient warriors possess the capability and desire needed to successfully serve the interests of Chaos well and long enough to earn daemonhood. However, the oldest of the Daemon Princes may actually have ascended to their immortal stature during the savage age long before Mankind left Terra to explore and settle the stars.

When a Daemon Prince conquers a world in the physical universe using the mortal Forces of Chaos that serve him, his patron Chaos God or the Chaos Gods as a whole if he serves Chaos Undivided bestow the world upon him as his own personal realm. The conquered planet is absorbed into the Immaterium. It becomes what the Imperial Administratum has deemed a Daemon World, a sub-reality of the Warp in which the ruling Daemon Prince has complete control over reality, having essentially become a minor Chaos God within the boundaries of his own realm. Like all daemons, Daemon Princes much prefer the environment of the Warp to the physical universe, and only rarely do they deign to actually leave the Empyrean and reenter the material universe. Daemon Princes are prized by the Ruinous Powers of Chaos because unlike true daemons or even the Chaos Gods themselves, they are former mortals. As previous denizens of the Materium, Daemon Princes still have a deep knowledge of the material universe and how mortals think and act. Despite this, many Daemon Princes continue to crave more power and further ascent within the ranks of the Forces of Chaos and so they often choose to join the retinue of a Greater Daemon of their patron Dark Power. To their surprise and anger, Daemon Princes often discover that other daemons, particularly the Greater Daemons who outrank even them amongst the servants of the Ruinous Powers, regard Daemon Princes as inferior beings because of their mortal origins, seeing them as tainted by their heritage as natives of the physical universe. As always, even Daemon Princes are no more than tools of Chaos, albeit extremely powerful ones, to be used and discarded as the situation demands it.

The greatest and most powerful of the current Daemon Princes were once the Traitor Primarchs of the Space Marine Legions that turned against the Emperor of Mankind during the Horus Heresy. These powerful entities, often called Daemon Primarchs, can easily be distinguished from other Daemon Princes by their distinctive appearances. They are still revered by the Traitor Legions of Chaos Space Marines they corrupted millennia ago, even though it has become uncommon for them to personally lead these Legions in battle from their Daemon Worlds. Instead they prefer to combat their daemonic rivals within the Eye of Terror, leaving the direction of their Legions, now broken up into individual Chaos Space Marine warbands, to their subordinate Champions of Chaos. 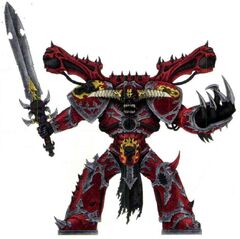 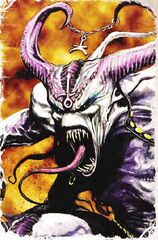 A Daemon Prince of Slaanesh 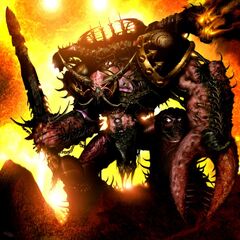 A Daemon Prince in service of Slaanesh
Add a photo to this gallery
Retrieved from "https://warhammer40k.fandom.com/wiki/Daemon_Prince?oldid=223300"
Community content is available under CC-BY-SA unless otherwise noted.