"Daemonic fury, bound into the shells of metal beasts and set loose upon the galaxy. Tell me, mortal: have you ever seen such a glorious sight?"

A Daemon Engine is a nightmarish artificial construct used by the forces of Chaos that is a fusion of a realspace vehicle or combat walker with a possessing daemonic spirit of the Warp. Daemon Engines are gigantic war machines that prowl on mighty piston-driven limbs.

Jutting from their armoured torsos are gargoyle-muzzled cannons and heavy weapon-arms that end in murderous tools of war. To compare a Daemon Engine to an ordinary vehicle is folly, for each of these beasts possesses its own malevolent sentience rather than a crew.

Bound within the battle-scarred metal of each Daemon Engine is the essence of a raging Warp entity, imprisoned in a physically indomitable body in order to better serve the Chaos Space Marines in their Long War against the servants of the False Emperor.

The Imperium has little concept of how these affronts to sanity came into being. Fragments of ancient texts and post-action pict-captures have allowed Imperial strategos to gather that they are creatures of daemonic nature, but little else. Even amongst the ranks of the Chaos Space Marines, there are few who understand how these immortal beasts are created.

With the correct rituals, a devout Chaos Sorcerer or Word Bearers Dark Apostle can coax a Daemon to possess the body of a mortal man, but only the brotherhood of the Warpsmiths can bind an unwilling Daemon into a machine.

Unlike the rituals of possession, the process of creating a Daemon Engine is not one of mutual assent. Using corrupt rituals and forbidden alchemy, Adepts of the Dark Arts can force immaterial spirits into a physical shell of the Materium. It is the Warpsmiths that bring hell-forged Daemon Engines into being, from Forgefiend gunbeasts to new Chaos Titans. Beyond the soul forges of the Immaterium, Warp entities are bound in nooses of rope woven from the hair of murderers or with chains fashioned of scrimshawed bone.

These captive Daemons are dragged biting and screaming into the flame-hearted citadels of the Dark Mechanicum. In the molten heat of the dark forges, the Warpsmiths trap the screaming Daemons within the rune-bound hulls of the giant metallic beasts they have captured or created.

The screaming and newly-created machine-fiends must then be bludgeoned into submission until the time of battle is at hand. Caging a hate-filled Daemon in a physical form that can smash through a fortress wall is a hazardous business. Dozens of machine-thralls (and many more Dark Adepts) are lost with the creation of each Daemon Engine, for they do not fear death or pain, but delight in bringing it to their enemies in as vicious a fashion as possible.

Creation of a Daemon Engine

"All of the souls you will reap,
All of your spoils of war,
To be a keeper of the Forge,
But a trifle price for the boon that is bestowed upon you."


— From the Iron Pact

Daemon Engines are beasts of living metal, towering engines of war driven not by technology, but diabolic machine-lore. They take many forms, from tracked behemoths to towering giants and they carry a fearsome array of weaponry, much of it unknown or forbidden to the machine canon of the Cult Mechanicus.

Within the armoured shell of each Daemon Engine is entrapped a denizen of the Warp, a being dragged forth from the Immaterium against its will and nature, sealed within the machine by the unreasoning hatred for the material universe in which they find themselves; they seek only to shed the blood of its mortal inhabitants and to feast upon their unbound souls. They are as much a threat to their supposed masters as they are to the enemy, and must often be restrained with heavy, warded chains between battles, lest they fall upon those who summoned them in an orgy of bloodshed.

Daemon Engines are the product of tripartite blasphemy, for to bring one into being a sorcerer, Dark Apostle and a Warpsmith or Dark Mechanicum magus must come together in fell co-alignment. The sorcerer must utilise the forbidden dark arts to weaken the thin skein of reality and create a portal through which a Daemon may be drawn forth.

The Dark Apostle must entreat the Ruinous Powers and bind that denizen to his ferocious will, thus dragging it through the portal the Sorcerer has created.

The Warpsmith's role is to provide the mechanical shell into which the Daemon is bound, and to set the warding-chains upon it so that the Daemon does not escape.

Such a process is costly in the extreme, and each step involves much shedding of the blood of innocents and the invocation of unspeakable powers. The greatest danger is to the participants themselves, for any misstep, any weakness of resolve or any misspeaking of the ritual incantations can bring about the doom of all involved.

At the least, the summoning will fail, bringing down the ire of the warlord in whose name it is being enacted. At worse, the Daemon will come forth unbound or possess one of the three, and violence unimaginable will be unleashed.

In some cases, those who seek to create the Daemon Engine are dragged through the portal they have created and cast adrift upon the tides of the Warp, their bodies torn apart in seconds by the predators of that unreal dimension, their souls fed upon for all eternity.

Binding of the Daemon

Those few savants of machine lore to have survived a close examination of any form of Daemon Engine have noted that many feature some manner of containment vessel, often warded and chained tightly shut and invariably aglow with the fell powers of the Warp. The exact nature and purpose of this device remain largely a mystery, but several observations have been noted.

Firstly, the vessel is only present on war machines constructed in the realm of mortals -- it has yet to be observed in engines wrought in and summoned forth from the Warp. It has been observed, for example, on Blood Slaughterers, for these are held to be made by mortal hand, but not on Brass Scorpions, which are held to be summoned from the Abyss.

Secondly, this vessel bears a disturbing resemblance to the cortex and reactor chambers utilised long ago by various machine constructs of the Cult Mechanicus, constructs almost entirely consigned to history as the mysteries of their construction and maintenance have been lost.

Several tech-savants and daemonologists serving the Ordo Malleus now suspect that these vessels are used to draw forth and perhaps contain the infernal spirit within the Daemon Engine. Indeed, breaching the vessel has been observed to bring about the Daemon's escape and the catastrophic destruction of the engine itself.

Though such an endeavour will secure the fall of the Daemon Engine, the escaping spirit is wont to reap utter devastation as it is driven back whence it came by the cold inexorability of realspace, making even its successful banishment a dangerous prospect indeed.

The following is a list of all known Daemon Engines, with the exception of Chaos vehicles that are daemonically possessed, such as the Rhino, Land Raider, Hell Blade, and Chaos Titans:

Two of the most potent Daemon Engines of Chaos -- the Forgefiend and the Maulerfiend. 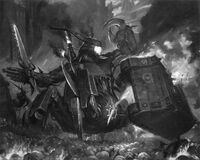 A pair of Daemon Engines assault an Astra Militarum position.. 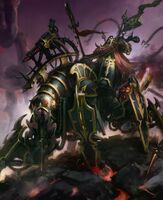 A Lord Discordant of the Black Legion riding his Helstalker Daemon Engine into battle.