The Remora Drone Stealth Fighter, officially designated as the DX-6 Remora, is a light, unmanned Drone fighter recently developed by the Tau Empire's Earth Caste. Packed with advanced Tau technology, Remoras were first encountered by the forces of the Imperium of Man during the Tau's raid on the Imperial penal mining colony of Typha IV. The Remora is a stealth Drone aircraft that commonly flies in support of Pathinder and Stealthsuit teams on scouting and reconnaissance missions, where they excel in conducting high speed hit-and-run attacks and rapid flanking manoeuvres. As a Drone fighter, the Tau are willing to deploy Remoras into situations where they would not risk valuable Air Caste crew, such as hazardous environments. Remoras often work to disrupt and scatter enemy troops whilst singling out and destroying enemy targets of strategic value, such as command vehicles and enemy support vehicles, with their Seeker Missiles. Remoras are also capable of operating effectively in support of Air Cadres in dogfighting with enemy aircraft.

Remoras are capable of operating in either full flight or anti-gravitic skimmer mode in combat, giving them great versatility in their deployment and tactical movements. However, whilst in full flight, the aircraft relies on aerodynamic principles to stay aloft at a speed above half of its cruising speed of 1800 kilometres per hour. If the Remora ever becomes immobilised due to engine damage, it will fall and crash to the ground. The Remora's anti-gravitic engines are also of limited use. Because of this, Remoras may only operate as skimmers for up to ten minutes per hour. Remoras themselves have a short operating range and need to be carried into battle underneath a modified Tiger Shark AX-2-2 variant mothership, or in the back of a specially modified Manta; made easier due to their collapsible wing design. Whilst the Drones are artificially intelligent and have some degree of self-initiative, they still rely on their mothership to relay data towards the drone fighters and direct them whilst in combat with their advanced Drone Controller systems. These mothership aircraft often direct Remoras from a high altitude and usually do not actively participate in combat. In the rare event a mothership aircraft disengages from the battle, or is destroyed, Remora fighters will revert back to their basic programming and begin to suffer from their lack of direction, making their manoeuvrability sluggish and slow as they move about aimlessly.

Remoras are armed with twin-linked, long-barrelled Burst Cannons as their primary armament, allowing them to target infantry from long ranges effectively. Remoras also carry two Seeker Missiles which can be fired upon targets designated by Marker Light operators on the ground, or by the Remora's own Networked Marker Light. The Remora's Seeker Missiles are most effective against light to medium armoured targets as the Remora's speed allows it to move into positions where its Seeker Missiles can strike the more vulnerable side or rear armour of vehicles. Remoras are equipped with a Targeting Array and Blacksun Filter as standard. The Targeting Array increases the accuracy of the Remora when firing its Burst Cannons and Networked Marker Light, whilst the Blacksun Filter utilises its optical filters to give the Drone fighter better combat effectiveness in low-light conditions and darkness. Remoras are also equipped with the same stealth field technology used by XV15 and XV25 Stealthsuits. This allows the Remora to hide itself from enemy sensors and also become all but invisible once the field is activated. It is because of this stealth field capability that Remoras are a valuable tool in scouting and ambushing enemy forces whilst remaining unseen. 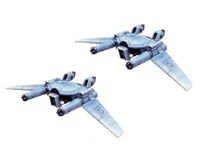 A pair of Remora Drone Fighters with sky-inflected camouflage 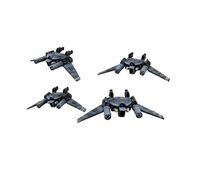 A DX-6 Remora of the Ksi'm'yen Sept

A DX-6 Remora part of the Dal'yth Defence Force

A DX-6 Remora of the T'ros garrison force
Español
Community content is available under CC-BY-SA unless otherwise noted.