The Cyclops Remote Demolition Vehicle is a small, unarmed remote-controlled tank used by the Imperial Guard that can be guided to its target and then self-destruct, destroying itself and its target. These small tanks are controlled remotely by a single, specially-trained Imperial Guardsman. The vehicle is controlled by a small handset connected to a communications backpack, while the controller keeps himself at a safe distance.

The Cyclops Remote Demolition vehicle was originally thought to have originated on the Forge World of Lucius sometime during the 38th Millennium, but its origins lie further back to the bygone era of the Great Crusade in the 30th Millennium. A remotely controlled demolition vehicle, the Cyclops was deployed by the elite Solar Auxilia of the Imperial Army to breach heavy key enemy-held positions in circumstances where a direct assault was judged too costly and engagements from afar was made impossible by dense terrain. The Cyclops was transported to the front line in a Dracosan Armoured Carrier or an Auxilia Arvus Lighter, and unloaded under cover a safe distance from the intended target. It was then controlled by an operator equipped with a vox control unit, and initiated into the outer tiers of the machine arcana, granting them sufficient knowledge to guide the Cyclops to its target and to detonate its internal charge when it was close enough to inflict the requisite damage. The unit could be configured with a variety of munition types for use against different types of target, one of which, the automantic imploder, was so powerful it was sometimes employed against apex xenos-forms and similar foes when all other means had failed.

In the 41st Millennium, the Cyclops has been used regularly throughout the Imperium by the Imperial Guard for any demolition task deemed too risky for human soldiers to accomplish. The Imperial Guard regiments that have used the Cyclops have great affection for it as it keeps them out of harm's way. The Cyclops is primarily used to attack enemy bunkers, strongpoints, and obstructions such as razorwire and tank traps. Imperial Guardsmen have found them useful for other tasks such as clearing minefields, destroying bridges, attacking fortified enemy structures during urban combat, and even attacking enemy tanks. Cyclops are transported to the battlefield by Chimeras, but can also be carried in greater numbers by Gorgons, Crassus, and Valkyrie transports. A Cyclops can also be air-dropped behind enemy lines to attack fuel depots, ammunition stores, and command structures to sabotage enemy forces.

Cyclops of the Catachan 146th Regiment 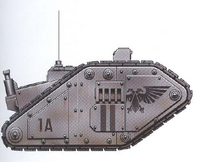 Cyclops of the Mordian 201st Regiment 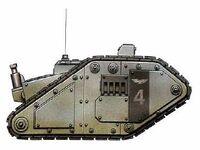 Cyclops deployed during Operation Comet of the Taros Campaign

A Cyclops Remote Demolition vehicle being deployed by a Chimera armoured transport
Add a photo to this gallery
Retrieved from "https://warhammer40k.fandom.com/wiki/Cyclops?oldid=292037"
Community content is available under CC-BY-SA unless otherwise noted.