The Cult of the Four-armed Emperor is a Genestealer Cult that was the first ever encountered by the Imperium of Man on the Mining World of Ghosar Quintus in the late 41st Millennium. It is now one of the most widespread in the galaxy, concentrated in the Segmentum Ultima.

The Cult of the Four-armed Emperor are cunning, wily and endlessly patient. They are the masters of subterranean assault. Wherever one of their devoted walks in the open, a thousand more lurk beneath, ready to surge up for the kill.

It was on the planet of Ghosar Quintus, in the year 680.M41, that the horrible corruption of the Genestealer Cults first became properly known to the Imperium's Adepts. Investigating what had the signs of a xenos-based perversion of the Imperial Creed, the decorated Inquisitor Chaegryn led a team of Tempestus Scions to the world. He ventured into the largest mining colony there, known as the "Great Pit." The deeper Chaegryn explored, the more evidence of deviance he found.

Strangely, the Inquisitor's last communiqué stated that all was well. He concluded that the Trysst Dynasty, who had led the mining colony as its Planetary Governors in its exemplary record of service for countless generations, should be left to its own devices. With the Inquisitor being a trusted and respected member of the Ordo Xenos, none thought to look further. It was a full Terran year before Chaegryn's fellows noticed something was wrong -- the Inquisitor was still missing, and the style of his last missive was not typical of his usual communications.

Fearing some manner of alien presence, a five-man Kill-team of Deathwatch Space Marines was despatched on a follow-up mission of lethal investigation, yet they too were swallowed by the mysteries of the Great Pit. Only when the steel-willed Chaplain Ortan Cassius of the Ultramarines mustered his own hand-picked Deathwatch Kill-team did the Imperium return to Ghosar Quintus.

His conviction proved the best weapon of all, for with fire and fury he cut through the web of secrecy and misdirection that protected the Tryssts' hidden workings.

The mutant workers of the cult moved to attack, and layer by layer the vile truth was unearthed as the Deathwatch ventured ever further into the pit. Chaegryn himself was never found, though his Servo-skull yielded more of the picture that Cassius and his team were slowly putting together.

Kill Team Cassius fought through hundreds of Genestealer Cultists as they plumbed the depths of the Trysst Dynasty's corrupted world. Though they made it out alive, the Space Marines were changed by that gruesome ordeal -- and the Imperium too, after a fashion.

Ortan Cassius became a dogged, obsessive foe of the Tyranid race in all its forms, and has worked closely with the Deathwatch and Ordo Xenos to root out a dozen cult infestations since -- for most shocking of all the discoveries upon Ghosar Quintus was not the Genestealer Patriarch that lurked at the heart of the cult, but the damning evidence in the dynasty's shipping holographs.

Though the Deathwatch is aware of the threat, since the dawning of the Great Rift, communicating it to the wider Imperium has proven difficult if not impossible.

The Trysst Dynasty, and the infestations that followed that of Ghosar Quintus, are so sly they effectively turned the Imperium against itself. Under the guise of industry, the xenos-tainted Trysst Dynasty spread its curse across not only the Ghosar System, but throughout the Charadon Sector and beyond.

In efficiency, in the consistent, unflinching work ethic of the cult's members, the war leaders of the Four-armed Emperor have found a tool like no other for their own expansion.

Rather than spreading in secret, using single covert stowaways or clutches of Genestealers hidden in dark recesses, the Cult of the Four-armed Emperor works so hard to increase its industrial output that its members are being actively recruited. Blind to the consequences, the agents of the Departmento Munitorum have gone out of their way to ship the cult's agents far and wide as exemplars of an efficient Imperial workforce, and the cult has been only too happy to oblige.

Within solar weeks of each transfer, the cult's operation begins anew, its leaders preparing the way for an import of Purestrain Genestealers once the transit connection is well enough established.

Before the hideous truth of Ghosar Quintus was revealed by Ortan Cassius, it was used as a prime exemplar of a "Delverworld," a planetoid given over entirely to mining the Eastern Fringe. Its tithes were consistently at least a fifth higher than the required level, and the adamantium mined from its substrata was purer than any other source in the sector -- every ingot polished to a bright sheen, neatly stacked and dutifully categorised by countless Trysst workers.

More than that, the dynasty's workers were content to subsist only on gruels and nutrient pills, and there were no recorded incidences of unrest. To the Imperium they seemed a model population. When this came to light through the planet's tithe reports and later Lexmechanic assessment, the Munitorum shipped out work groups of the Trysst Dynasty to every other Delverworld within reach, there to act as consultants and role models for the other, less efficient populations to aspire to.

Thriving for sixteen generations before Inquisitor Chaegryn's original investigation, and with thousands of offshoots not on Imperial record, the Trysst Dynasty has spread the Cult of the Four-armed Emperor across half of the galaxy through means both fair and foul.

They are consummate miners, burrowers and subterranean explorators; they have learned well how to thrive in the darkness, keeping their insidious secrets buried beneath several layers of respectability. Theirs is a galactic infection rather than a local one, for of all the Genestealer Cults these are the big thinkers, the plotters in the shadows, the grand viziers working hard to prepare the way for a king yet to arrive.

Despite the Deathwatch's best efforts to track them down and purge them from existence, their warrens honeycomb hundreds of Delverworlds. There they thrive in the underhives and sump strata of Imperial metropolises. Their workers toil hunchbacked in tight maintenance pipes, labour through sweltering work shifts in heating conduits and clear blockages in vermin-infested sewers without complaint.

Their agents scurry along secret passageways and crawl on their bellies through tight pipeways to reach their targets, making their kill before leaving unnoticed.

The war leaders of the Cult of the Four-armed Emperor, on the other hand, fight in the daylight as much as the dark. They seek out the schematics for every building and settlement they reach, maximising the potential of each underground network and altering plans so new areas are built -- only to erase all record of them and ensure those involved in their creation who are not kin are despatched elsewhere, or slain.

These visionaries push their tendrils into every level of society, but make especial use of the countercultures and underground elements who may know the territory better than any surface dweller.

Truly the Cult of the Four-armed Emperor is to be feared. Of all the cults, it is this troglodytic brotherhood that best uses the techniques of demolition, undermining, and ambush from below. They have industrialised their way of war, and whilst doing so, turned the vast, lumbering giant of the Imperial workforce against its masters.

To strike against them is to kick a termite nest -- only to find that which crawls across the surface mounds is but the tiniest fraction of a teeming colony of life forms that boils swiftly up from the labyrinthine warrens beneath.

The Cult of the Four-Armed Emperor takes over the volcano-farming world of Thousandile in a single Terran year in the late 41st Millennium. Having been commissioned to "bleed" the lava rivers that are slowly cooking Thousandile's hive cities -- much as a medicae would use leeches to bleed a swollen limb -- the Trysst mining dynasty brings in hundreds of large industrial drills. At first, their work goes well -- or so it seems -- as the temperature in the hives drops to become bearable once more.

Then, on what comes to be known as the "Day of Eruption," all of the geothermic tunnels overflow at once -- worse still, their level is swiftly rising. The reason for the rising tide of lava is secondary to survival. In their desperation, all the gangs within the hive move to higher ground, fighting their way into the upper spires and eventually overcoming the Spyrer hunters who attempt to repel them through sheer weight of numbers.

Meanwhile, the cultists of the Four-armed Emperor take more and more of the hive for their own territory, and when the lava recedes, use aqua pipes and sluices to harden the metal of the main hive once more. Amongst the melted organic-looking labyrinths of the lower hives, a new order rises -- and this time, its deadly tides rise all the way to the top. 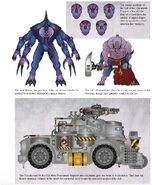 More units of the Cult fo the Four-armed Emperor,including the Genestealer Patriarch an Aberrant and a Goliath Truck
Add a photo to this gallery
Retrieved from "https://warhammer40k.fandom.com/wiki/Cult_of_the_Four-Armed_Emperor?oldid=345460"
Community content is available under CC-BY-SA unless otherwise noted.