The Cult Hydraic is a highly-active Genestealer Cult whose gene-sects are spread across many worlds of the Segmentum Pacificus but often act in unusual concert.

To assail an infestation of the Cult Hydraic is to attack a single tendril of a far greater organism. For hundreds of Terran years this organisation has sent broods of Purestrain Genestealers from the orbital dockyards of Vigilance Quadrex. Though many have been subsequently destroyed, many more have started the Cult Hydraic anew, their colours flown on a dozen Imperial worlds across the Segmentum Pacificus.

To attack one such node is to invite slow but certain retribution. With news of the hostile act transmitted psychically through the Broodmind by the cult's war leaders, it is only a matter of time before several more elements of the organisation converge on the aggressor -- and either eradicate them entirely, or use sinister charisma to convert them to the cult's cause. 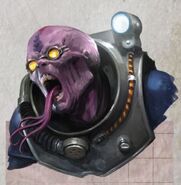 A Neophyte Hybrid of the Cult Hydraic

An Acolyte Hybrid and a Neophyte Hybrid of the Cult Hydraic
Add a photo to this gallery
Retrieved from "https://warhammer40k.fandom.com/wiki/Cult_Hydraic?oldid=346485"
Community content is available under CC-BY-SA unless otherwise noted.