"That which is unknown and unseen always commands the greatest fear."

The reason for this is not because of the way that the Culexian Assassins carry out their operations, or the heinous methods of killing they employ. It is because of the very nature of the Culexus Assassins themselves.

The Assassins of this particular temple are not chosen because of their innate savagery, cunning or combat skills. First and foremost, potential candidates are chosen to be Culexus Assassins because they are born with an extremely rare human genetic mutation called the Blank Gene -- which means they have no presence within the Warp like all other sentient beings, and thus no soul.

Even normal humans find the presence of a psychic Null extremely disturbing, but the effect is most pronounced on psykers, who find Pariahs genuinely terrifying, as though staring into a hole in the universe when they use their Witchsight.

It is hardly surprising that Pariahs are often treated like outcasts or lepers in Imperial society, rejected by their parents and banished from their homeworld's local settlements. Local superstitions on many worlds often warn about touching them, saying that to do so would bring bad luck. Resigned to their fate, many Pariahs lead simple, solitary existences, as far away from heavily populated areas as possible.

All psykers and intrinsically psychic species like the Aeldari consider a being like a Culexus Assassin to be an absolute abomination. Even monstrosities such as a Tyranid Hive Tyrant can balk at the prospect of being permanently severed from their psychic abilities and the Hive Mind. The Culexus Assassin causes absolute terror in all psykers -- which is why they are so useful to the Imperium.

When the Sisters of Silence first captured and transported large numbers of Pariahs back to Terra during the Great Crusade, humanity had its first disturbing revelation of the potency of these strange mutants. As large groups of Pariahs were brought to Terra, they began to cast a shadow in the Warp, blocking out the Astronomican, the vital psychic beacon used to guide starships to the far reaches of the Imperium.

Other branches within the Imperium of Man, especially those that relied upon the abilities of psykers, were horrified by the existence of Pariahs. Several members of the Council of Terra sought to have Pariahs outlawed outright like other dangerous mutants -- tasking the Sisters of Silence with the ruthless extermination of any more Pariahs that were found just as they eliminated renegade psykers who presented a threat to humanity.

A number of members of the Council of Terra, including the Paternal Envoy of the Navis Nobilite were pushing the Emperor of Mankind to issue an official decree to rid the Imperium of the "anti-psyker" mutants that threatened their Adepta's very existence.

This was unfortunate, for the Officio Assassinorum had been working in secret with the Magos Biologis and Genetors of the ancient Mechanicum on the order of Malcador the Sigillite, the Regent of Terra and the founder of the Officio as the first Grand Master of Assassins, to see if it was possible to harness the Pariah's strange abilities and use them to kill psykers. Their work was almost complete; many years had been spent developing specialist wargear and training techniques, all of which was about to be ruined by a zealous witch-hunt.

Fortunately, the Emperor never had to issue an official decree, for at Malcador the Sigillite's behest, the Mechanicum announced that it was ending the Pariah Project, making a great show of closing down its laboratories and executing many of the "specimens" it had tested there. Satisfied that no further action was needed, the bureaucrats of the Council of Terra turned their attention to the more important matters at hand.

However, closer study of the fragmentary Imperial records from this time reveal that the number of executions did not match the number of Pariahs contained within the laboratories of the Mechanicum. Working in collusion with the Officio Assassinorum, the Mechanicum spirited away the most promising Pariahs to a specially constructed fortress hidden on Terra, beyond the reach or knowledge of the more zealous branches of what eventually became the Adeptus Terra after the Horus Heresy.

It was there that the Culexus Temple, originally known as the Culexus Clade, was born in its modern form under the direction of its first Director Primus, the individual known only as Sire Culexus.

Culexus had sworn an oath alongside Malcador and the five other Directors Primus of the newborn Officio Assassinorum to defeat every enemy of the Emperor no matter where or how they sought to hide from Imperial justice. The Culexus Assassins would become an important component of keeping that vow.

The Fortress of the Soulless

Most of the other ancient temples of the Assassinorum are granted a certain amount of autonomy, allowing the general day-to-day running, training and sometimes mission assignation to be taken care of by older, more experienced Lord Assassins.

However, the Culexus Temple is ruled directly by high-ranking officials of the Officio Assassinorum. The temple itself is located not upon Holy Terra, but within a fortified complex located on a dead moon, outside the range of the Astronomican in the far reaches of the galaxy.

This is the Fortress of the Soulless, an echoing, armour-clad fastness that lies always beneath a suffocating blanket of dread. All Pariahs and Culexus Assassins are kept within the fortress unless on active duty.

If any are ever allowed to leave, then it is always under a veil of secrecy and with the highest levels of security. It cannot be doubted that the Culexus Temple has proven itself of invaluable use to the Imperium on countless occasions. Even so, there are factions within the Imperium that would see every Pariah executed and the Culexus Temple utterly destroyed.

"That thing really is an unparalleled witch-killer; it fights with a ferocity I envy and a fervour that I admire. Still, it’s a pity how frequently I need to replace the Acolytes assigned to watch over it. You’d think one would have gotten used to the thing before going mad by now."

Pariahs can nullify psychic powers, and if they are in close quarters to their targets their very existence drains the strength from psykers. Culexus Assassins therefore specialise in psyker-hunting, most notably of Aeldari Warlocks and rogue human psykers. Culexus Assassins have also been shown to be useful at combating daemons, as daemons are entirely composed of psychic energy drawn from the Warp and given form in realspace only so long as they have a link to the Immaterium or possess a mortal body.

The Culexus Assassin attacks using his own innate abilities enhanced by years of training, mental exercises and arcane wargear. He slips through the battle lines and bodyguards, his negative aura muddling the minds of conventional troops, allowing him to close upon his targets.

Bolts of negative Warp energy blast the minds of enemy psykers and strip them of their powers before he moves in for the kill, sapping the very life-force from their bodies.

A female Culexus Clade Assassin during the Horus Heresy

A Culexus Assassin unleashes his power

A Culexus Assassin arrayed in his deadly panoply of death 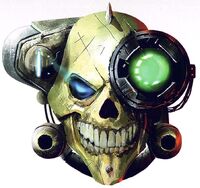