A Cryptek is one of the technologists and engineers of the Necron species, and they are responsible for studying and maintaining the technology of the Necron dynasties. A Cryptek's powers mirror that of the psykers found amongst the other intelligent species of the galaxy.

However, while psykers channel the energies of the Warp to accomplish their seemingly supernatural feats, a Cryptek uses their highly advanced knowledge of science and technology to manipulate the purely physical universe's fundamental forces and produce many of the same seemingly magical effects.

What a Cryptek often accomplishes with their technology is nothing short of magical to the eyes of the "lesser" intelligent peoples of the galaxy.

With their knowledge of arcane sciences, a Cryptek can transmute a foe into liquid adamantium, turn them into a speck of dwarf star matter, set the air ablaze, call down eldritch bolts of lightning and other equally impressive feats of technological arcana.

Crypteks are members of a pan-galactic conclave of Necron technologists whose purpose is to study and maintain the eldritch devices of their ancient species. They are masters of dimensional dissonance, singularity manipulation, atomic transmutation, elemental transmogrification and countless other reason-defying technologies.

In many ways, a Cryptek's powers mirror those employed by the psykers of other intelligent races, but instead of using their innate psychic abilities by channeling Warp energies, the Cryptek employs arcane science to harness the universe's fundamental forces.

Every Cryptek conclave specialises in a particular field of techno-sorcery in one of a hundred thousand disciplines. These conclaves were originally founded to share information and expertise amongst Necron settlements from one end of the galaxy to the other, but have since become fragmented and isolated.

In the long millennia since the Necrons' biotransference, Crypteks have become just as stagnant and fragmented as every other aspect of Necron society. In the present era of the late 41st Millennium, the surviving Cryptek Conclaves are maintained out of force of habit more than for any practical purpose.

Though Crypteks have no official rank in the political structure of a Necron dynasty, they wield immense influence. A Cryptek's power springs from the army of Canoptek Spyders, Wraiths and Canoptek Scarabs under his control, but is mainly acquired from the ignorance of the disinterested Necrontyr nobility, who have no interest in the working of the technology they employ.

As Tomb Worlds need perpetual maintenance to maintain their countless systems functioning at peak efficiency, it is not unknown for a slighted Cryptek to bring the maintenance cycle to a screaming halt should his supposed "betters" require a reminder of the power he and his kind wield. Even the proudest Necron Overlord will muster an apology when his soldiers and weapons seize up on the eve of battle.

On occasion, a Necron Overlord will go so far as to recruit a particularly trusted and knowledgeable Cryptek to serve in his Royal Court. To entice a Cryptek to serve it is common for an Overlord to grant him the first pickings of precious alloys, power cores and focus crystals in exchange for his services in a campaign.

This can prove politically dangerous for the Overlord, as this essentially elevates the Cryptek to the same rank as the Necron Lords already serving within his dynasty, and so inevitably fosters resentment amongst his regal subordinates.

Nonetheless, having the Cryptek's wealth of knowledge and expertise close at hand is normally viewed as more than adequate compensation for the political risk. Ultimately, the only thing that holds the ambitions of a Cryptek in check is another of his kind. Should a retained Cryptek rise too far above his station, a Necron Overlord will attempt to replace him by luring a different, and more tractable, Cryptek away from the service of a rival.

This process can also have complications, for whilst no Cryptek will knowingly supplant another of the same conclave, a rival from another conclave will not hesitate to do so. This usually results in plots and counterplots which can lead to rivalry, or even outright conflict, between different Crypteks and their respective conclaves.

All Crypteks possess a level of genius that makes the finest minds of Humanity appear drooling simpletons by comparison. The Technomandrites are the most inventive of them all.

Many of the Necron species' most powerful technologies can be ascribed to this hermetic brotherhood -- from translocation beams that teleport them from pocket dimensions into material space, to Gauss Weapons that strip their targets to their constituent atoms. So powerful did these Crypteks become that the Silent King, ruler of the lost Necron Empire, arranged for their downfall.

Only now they stalk from the shadows once more, released from exile by anti-Chaos protocols put in place against a breach from the Immaterium of cosmic scale, a breach like the birth of the Great Rift.

Though many a Necron Overlord seeks the blackstone that will hold back the flood of Chaos in this new era, the Technomandrites are already several steps ahead -- if their plans reach fruition, their mastery of science will give them the keys to ultimate triumph.

The Crypteks have developed countless disciplines of techno-sorcery, down through the aeons. Further, each individual Cryptek makes its own unique advancements in its chosen expertise. As such, it is unlikely for two Crypteks to ever wield quite the same abilities and weapons.

Presented here are the five most common Cryptek techno-sorcery disciplines, but by no means are these the only ones, as there are literally hundreds of thousands of such disciplines in use by the different Cryptek Conclaves:

Accomplished psychomancers are amongst the most keenly retained of all Crypteks due to their command over the powers of the mind.

If their abilities are employed properly, the enemy's morale will be quickly shattered within moments of the battle's start, leading to their appelation of "Harbingers of Despair."

Plasmancers are not subtle beings, for they choose to wield raw energy rather than go to the trouble of binding it into other forms.

Thus are they known as "Harbingers of Destruction," as the spread of destruction is their gift to the galaxy.

Chronomancers are known as "Harbingers of Eternity," as knowledge of the future flows through their every act.

Few chronomancers are trusted, as they always have a shrewd idea of how any event will unfold.

Ethermancer (Harbinger of the Storm)

Ethermancers are called the "Harbingers of the Storm," for the fury of the turbulent skies lies at their command. They can summon lightning, or set punishing winds upon the foe.

"Harbingers of Transmogrification" are adepts of geomancy and masters of the science once known to Mankind as alchemy.

Alchemist Crypteks specialise in the transmutation of matter from one form to another and the instilling of animus within inanimate objects.

Necron Cryptek prepares for the foe 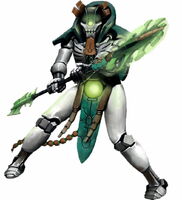 Cryptek Rahkoz, Chronomancer of the Suhbekhar Dynasty, Harbinger of Eternity
Add a photo to this gallery
Retrieved from "https://warhammer40k.fandom.com/wiki/Cryptek?oldid=373946"
Community content is available under CC-BY-SA unless otherwise noted.