The Crux Terminatus, or the Terminator Honour as it is also known, is amongst the most famous of all the honours to be granted to the Adeptus Astartes as prescribed by the Codex Astartes. It is awarded only to those Space Marines who have proven their battlefield skills as respected and accomplished Veterans of their Chapter. In many Chapters, the Chapter Master himself grants a Veteran Battle-Brother the right to wear the Crux Terminatus and serve in the Chapter's elite 1st Company as Terminators wearing those ancient relics of the Imperium known as Tactical Dreadnought Armour. Often, the recommendation of another member of the Chapter who already bears the honour lends great weight to the Chapter Master's decision. In some Space Marine Chapters, receiving the Crux Terminatus first involves a ritual of cleansing, prayer and meditation, the details of which vary widely from Chapter to Chapter. Each badge of the Crux Terminatus is said to have bound within it a tiny fragment of the Power Armour worn by the Emperor of Mankind during the climatic end to the Battle of Terra with the Arch-Traitor Horus over 10,000 standard years ago.

From Terra came a gift to all of those Legions who had remained loyal in the face of Horus's perfidy, a section of the Emperor's own armour so that it may be incorporated into the newly forged Terminator suits of his true sons. Reputedly, the Dark Angels Legion, for example, took delivery of the Emperor's right gauntlet, and over the coming decades over a thousand suits of armour were fashioned incorporating metal from his battle plate in the pauldrons. Many of those suits were gifted to their noble successors when Lords Rogal Dorn and Roboute Guilliman broke the Space Marine Legions down into smaller Chapters during the Second Founding, and though most have been lost down the millennia, some of their battle-brothers still went into battle in armour bearing those original Crux Terminatus. It is whispered amongst the highest echelons of the Inquisition that all of the Grey Knights Chapter's Cruxes hold a shard of the One True Armour. Whether or not this is true it means that these ancient suits of Power Armour bearing Terminator Honours are considered even more rare and precious to a Chapter as a result of their reputed connection to the Master of the Imperium. However, if this is true, then each suit of Terminator Armour must only contain the most minuscule of fragments.

The design of this ancient badge can vary considerably, even within a single unit or Chapter. Sergeants' and officers' Crux tend to be more elaborate and finely detailed than those worn by normal Battle-Brothers, but all are venerated equally. To lose even a single Crux in battle is to betray the Emperor’s trust and bring great shame down on the entire Chapter.

This honour appears most commonly as a skull set onto a cruciform shape of red iron or bone. Terminator Sergeants often add crossed bones behind the skull, whilst lightning bolts behind the skull are often added for Terminators trained as assault units wielding Lightning Claws or Thunder Hammers paired with Storm Shields. Variations include the size and dimensions of the skull and the removal of the crossed lightning bolts or bones or their scale in relation to the shape of the cruciform. Elements of the Crux Terminatus on the shoulder plate of a Terminator can be adorned with additional ornamentation in recognition of acts of supreme valour. One such adornment is the Crux Argentum, a shoulder badge of silver encrusted with gems that is awarded to Space Marines who perform acts of valour above and beyond the call of duty. Smaller representations of the Crux are frequently worn by the Veterans who have earned it when they fight in standard Power Armour. These small icons (often of bone or metal) are hung from banner tops, weapons, and belts.

The Crux Terminatus is almost always worn on an Astartes' left shoulder plate, though it may also be worn on one knee plate (this is usually done only in combination with the shoulder plate, however). Only Battle-Brothers who have earned the Crux Terminatus are granted the specialised training required to wear Terminator Armour, having proven themselves worthy of the right to wear these rare and powerful relics of the Imperium's golden age into battle. Veterans who bear the Crux are often given great respect by other Space Marines of their Chapter, and in many such Chapters earning the Crux Terminatus means that the Veteran has also been inducted into the Chapter's elite 1st Company. Such an honour is often the first step towards attaining the upper reaches of command within the ranks of the Adeptus Astartes. 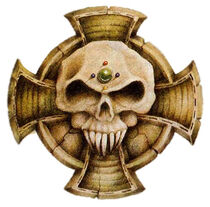 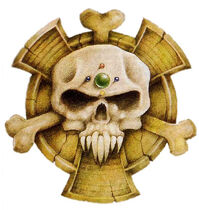 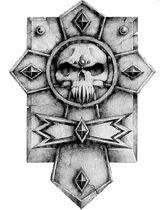 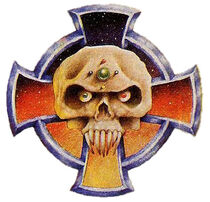 The Crux Argentum, awarded for extreme acts of valour to Astartes who already have earned the Crux Terminatus
Add a photo to this gallery
Retrieved from "https://warhammer40k.fandom.com/wiki/Crux_Terminatus?oldid=313818"
Community content is available under CC-BY-SA unless otherwise noted.