"By this oath, I pledge to stand by thee, against traitor, beast, or fiend, for only in death does duty end."

A Crusader is a holy warrior of the Adeptus Ministorum who is recruited for his or her unflagging devotion to the God-Emperor. Most are inducted into the ranks of the Ecclesiarchy from a Schola Progenium, selected for their deep faith in the Imperial Creed and the Emperor. To be chosen to become a Crusader is a great honour, though it leads not only to a gruelling life of asceticism and martial perfection, but also inevitably to an unmourned death in battle against the forces of heresy and apostasy. Nonetheless, such a calling guarantees the opportunity to test sword and shield against Mankind's greatest enemies. Equipped with a Power Sword and Storm Shield, the Crusader is a stalwart melee warrior whose place is in the heat of battle, surrounded by his foes.

It is improbable that a Crusader's fate will differ greatly in an Inquisitor's service. Some Inquisitors recruit Crusaders from the honour guard of the Cardinals Crimson -- that most mysterious of all the Ecclesiarchy's many orders. It is said that nowhere else in the Imperium of Man can more devout warriors be found -- save perhaps within the ranks of the famed Adepta Sororitas. In fact, several Crusaders have risen to become Inquisitors themselves in time, though they almost always begin their careers as staunch Puritans, as might be imagined.

Inquisitors are not the only ones who recruit the martial prowess of Crusaders. Ecclesiarchy priests often gather a band of bodyguards to assist them in the execution of their duties (and Heretics). Known as Battle Conclaves, these groups are necessarily small; anything larger would breach the prohibition of "men under arms" as laid down in the Decree Passive that prohibited the Ecclesiarchy from raising its own military forces in the wake of the abuses carried out during the Age of Apostasy in the 36th Millennium by the Renegade High Lord and Ecclesiarch Goge Vandire. Even so, the Inquisition's Ordo Hereticus covertly monitors the activities of the Ecclesiarchy's Battle Conclaves to safeguard the spirit of the Decree Passive, if not its letter.

The Crusader protects his allies from the unholy enemy, both with his martial abilities and the strength of his faith. He can serve an important role in any warband, bearing the brunt of the enemy's assault in order to protect allies, but is invaluable when facing daemonic adversaries. Resilient and focused as much on protection as on attack, as shown by the large shield he likely favours, a Crusader is a paragon of righteous battle. Standing strong against the enemy, a Crusader absorbs blows and gives back in equal measure against his foes, daemonic or otherwise.

A Crusader excels in single combat, taking the ﬁght to the foe to neutralise the threat or buy time for his allies to complete their mission. Although heroic single combat is where he shines, a Crusader can also hold the line against the gibbering tide of horrid foes. A Crusader's strong defence allows him to survive outnumbered where others would fall. However, even if it means sacriﬁcing himself, a Crusader stands ﬁrm so that the side of righteousness wins the day. Often, an inspirational death can turn the tide of a battle as surely as any cleaving strike or accurate shot, and the Crusader knows the true importance is the ﬁnal defeat of his unholy nemeses, for to lose against such foes is more than mere defeat -- it can spell the doom of an entire world's worth of souls.

The Crusader lives to battle the unholy enemies of humanity. One serving in a Battle Conclave or warband of Inquisition Acolytes is certain to receive numerous opportunities to test his skills against Heretics and deadly xenos. Perhaps the greatest calling for a Crusader is to serve an Inquisitor from the Ordo Malleus, pitting his sword against the Archenemies of Mankind. A sanctiﬁed blade is a potent weapon against the daemonic, at least in the hands of a skilled warrior. But even the greatest swordsman is of no use against the daemon, should he succumb to fear or falter in his faith. A Crusader's resolve is as strong as his sword arm, ensuring the mental and spiritual fortitude to see the ﬁght through and stand against the unholy foe.

Almost without exception, the Crusader is a master of melee combat, favouring a sanctiﬁed sword, axe, or mace to purge the daemonic. He is likely to eschew ranged weapons altogether. Many Crusaders view it as the ultimate show of faith and courage to take the ﬁght to the daemon in personal combat. In an Inquisition warband, a Crusader fulfils the role of front-line melee combatant. He does not sneak or shirk from the foe, but faces it head-on. Such displays of courage and faith inspire other Acolytes, giving them the resolve to ﬁght on against otherworldly enemies.

"My Crusader House teaches ninety-nine of the sacred strikes -- and I have discovered for myself a further six. Any who approaches too close to my charge this day will die by my hand, and perhaps I'll discover another strike."

—Crusader Mikaelus, at the Conclave of the Ninth Sun

Across the Imperium there exist countless orders that combine martial and religious ideals, each venerating and serving the God-Emperor according to its own ideals and traditions. To such warrior-monks, war and worship are one and the same. One type of order, little known to anyone outside of the Inquisition, is the Crusader Houses. Crusaders are warriors of utmost dedication and potency, sworn to serve the agents of the Inquisition with no regard for their own desires whatsoever. These puissant warriors are inducted into one of the Crusader Houses, each of which is a closed and secretive community with as few as a dozen or as many as several thousand members. Many of these Houses are located near to Inquisitorial facilities, and some are housed inside the larger Inquisitorial fortresses. The Tricorn in Hive Sibellus on Scintilla, the sector capital world of the Calixis Sector, hosts a number of Crusader Houses, the warriors of each always close at hand to accompany Inquisition Throne Agents wherever their duties may take them.

The duty of a Crusader is to protect a specific Inquisitor, to whom he is bonded by a solemn, unbreakable oath. However, they are more than mere bodyguards. A Crusader is the Inquisitor's right hand who delivers the coup de grâce or parries the attacks of his foe. To have been inducted into a Crusader House, the warrior must have been judged nigh-incorruptible, at least in so far as any mortal can be judged so. Induction into a Crusader House occurs only at the invitation of one of its senior members, and only after the subject has been scrutinised from a distance, sometimes for many standard years. Having joined the cloistered ranks of the Crusaders, the inductee puts aside all thoughts of personal ambition and dedicates himself body and soul to the House and the greater cause pursued by the Holy Orders of the Emperor's Inquisition. From that moment on, the Crusader casts off wealth and all possessions beside his weapons, armour, and the articles of his faith. He takes residence in a bare stone cell within the Crusader House until such time as he is called upon to serve an Inquisitor. Then, he goes where his new master wills.

Crusaders study every aspect of the arts of close combat, excelling in the use of melee weapons. As a matter of dogma, they eschew ranged weapons, believing that the pure essence of duty is only to be found in the clash of steel on steel, where blood is shed and bone hewed asunder. Crusader Houses teach many and varied martial techniques, many houses favouring a specific, signature weapon by which its members are known. Such weapons are invariably ancient and highly venerated, bedecked in devotional scripts and purity seals. They bear the intricately inscribed names and deeds of former owners, reminding the current bearer of his duties and that the eyes of the past are ever upon him. Many Crusader Houses favour long, heavy Power Swords, their reach able to intercept any blow that threatens their charge. Others favour massive powered polearms, often wielded two-handed so that the mighty haft breaks the blade of any blow it parries. In addition to their melee weapons, many Crusaders carry Suppression Shields of one type or another. Over the centuries, the shield has become something of an emblem of the Crusader, symbolising the essentially defensive nature of their calling. Yet, common to all Suppression Shields is some type of offensive capacity. Many house a compact electrostatic generator that delivers a powerful stun charge when an enemy's weapon comes into contact with its outer surface, stunning the attacker so that the Crusader can deliver the killing blow or rendering them insensible and ready for the Inquisitor's attentions. Other Suppression Shields incorporate single-use fragmentation rounds, Melta Charges, or even gas-release devices.

Many Inquisitors call upon the services of a Crusader, and Witch Hunters in particular are known to value their skills and spiritual fortitude. Although many Inquisitors are more than capable warriors themselves, others are more thinkers than fighters, preferring to surround themselves with specialists. A Crusader provides the very best personal protection an Inquisitor could hope for, allowing him to pursue his own duties safe in the knowledge that no danger can approach whilst the Crusader stands watch. 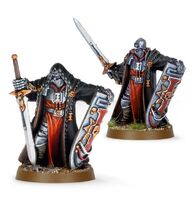 A pair of Crusaders, selected from the honour guard of the Cardinals Crimson, in service to the Inquisition
Add a photo to this gallery
Retrieved from "https://warhammer40k.fandom.com/wiki/Crusader?oldid=326656"
Community content is available under CC-BY-SA unless otherwise noted.