"Scour the planet, brothers! Cleanse it with the blood of men!"

The Crimson Slaughter is a Renegade warband of Chaos Space Marines dedicated to the service of the Blood God Khorne. Originally they were known as the Crimson Sabres, a Loyalist Space Marine Chapter of an unknown Founding whose reputation was built on ruthless efficiency and fastidious adherence to the Codex Astartes. Soon enough, signs that things were awry appeared in their Chapter history. These problems culminated with the genocidal war on Umidia. This world proved to be the fulcrum of change for the Crimson Sabres. The fighting there proved so intense that it changed the Chapter, as they found themselves cursed by the Chaos God Khorne, forever haunted by the fell voices of the slain even after the combat had ended. They attempted to cleanse themselves and silence the voices howling in their minds by assaulting their future foes with an almost blatant disregard for honour or mercy. As a result they soon found themselves declared Excommunicate Traitoris by the High Lords of Terra. Determined to sell themselves dearly, the Crimson Sabres turned to the Eye of Terror, where they planned to die fighting the enemies of Mankind and so reclaim their honour. However, the Chapter was wracked by mutation and eventually corrupted into full-fledged Chaos Space Marines during their sojourn in the Eye. Renamed the Crimson Slaughter, the voices which plague them can no longer be silenced except by the most obscene levels of carnage, and wherever they go they are presaged by a bow wave of Warp-spawned horror.

"I see fear in their eyes, right before they die. I see shock as they realise too late what it is to pit their pitiful strength against true power."

Of all the Renegade Space Marine Chapters that have abandoned the Emperor's cause, none are more feared than the Crimson Slaughter. The mere mention of their name brings a shudder to even the most stalwart of Imperial defenders, for it is linked to betrayal and bloodshed, a title synonymous with the blackest deeds of carnage and horrors unimaginable. The Crimson Slaughter entered the current 41st Millennium as a Chapter of Space Marines -- the ultimate defenders of Mankind. Through fate or the baleful influence of the supernatural, they have turned from the light of the Emperor. Their own paranoid insanity, or perhaps just their own weak will, has driven them down the path of damnation -- a road from which there is no turning back. The Imperium has attempted to suppress rumours that an entire Chapter of their Space Marines have been corrupted -- for the Chaos Space Marines are fearsome foes. They possess all of a Space Marine's abilities and skills, and his matchless gear of war. In addition to this, such enemies also wield the corrupting powers of the Dark Gods and their insidious gifts. These Traitors command arcane powers, infernal weaponry and daemonically-possessed machines that are akin to nightmarish monsters. They will stop at nothing to achieve their self-serving aims. Try as they might, however, the Imperium cannot conceal the truth about the Crimson Slaughter. Their deeds are too heinous, the scale of their bloodshed too enormous. Since turning their backs upon the Imperium they swore to protect, the Crimson Slaughter have carved bloody paths of destruction back and forth across the galaxy. In their wake they leave behind massacre sites so repulsive in their excess, so extreme in their savagery, that even hardened veterans must look away.

Once known as the Crimson Sabres, a Loyalist Space Marine Chapter, the Crimson Slaughter began their descent into Heresy on the Jungle World of Umidia with the genocidal purging of the Balethu Cults in 928.M41. The planet's inhabitants were, according to the Crimson Sabres, attempting to summon a powerful daemon of the Blood God Khorne. In their rush to judgment, the Crimson Sabres purged the entire planet of life. As punishment (or possibly reward) for the bloody annihilation of his worshipers, the Blood God Khorne cursed the Crimson Sabres to be haunted by the voices of those they had slain. The entire Chapter was literally haunted by the butchery of the mysterious Balethu; poltergeist activity surrounded the Crimson Sabres wherever they went. Whenever a Space Marine closed his eyes, he could see the faces of those he had killed and hear their screams in his mind. Sleep became impossible and, slowly at first, a pall of paranoid insanity spread through the Chapter like a disease. This led the Crimson Sabres to being declared Renegades by the Inquisition and the High Lords of Terra due to signs of continued psychological instability and over-zealous prosecution of their campaigns.

In an attempt to burn away the harrowing memories in the fires of war, Chapter Master Sevastus Kranon declared the neighbouring world of Demetra tainted by mere proximity to Umidia, and the killing began anew. The desperate plan worked, for the spectres of the Balethu were drowned out by a series of gore-drenched wars. Subsequent bloodshed could silence the voices, but only for a short time. Sevastus Kranon, the Chapter Master of the Crimson Sabres, led his warriors into the Eye of Terror to slaughter Traitors instead of spilling the blood of innocents, thereby gaining a temporary respite. Within the Eye of Terror, the Crimson Sabres were finally fully corrupted by Chaos and were remade as the warband of Chaos Space Marines called the Crimson Slaughter. They were blessed with many gifts to enhance their combat prowess. Sevastus Kranon, reborn as the Chaos Lord Kranon the Relentless, learned of the mystical Chaotic artefact known as the Hellfire Stone and led his warriors in search of it. The Hellfire Stone was a powerful Chaos artefact which, once anointed with the blood of a Loyalist Space Marine, would open a gateway to the Warp and allow a powerful Daemon of Khorne to enter realspace from the Warp. The Crimson Slaughter were also accompanied by the fearsome Helbrute, Mortis Metalikus, who had once been Sevarion Kranon, the actual biological brother of Sevastus. After refusing to give in to the blood frenzy that claimed his Chapter, he was imprisoned by his brother and driven mad before finally being entombed within the metal sarcophagus of a Helbrute.

Joining forces with a more powerful Traitor Legion in the midst of a Black Crusade, the Crimson Slaughter rampaged across the southern rim of the galaxy. When the world of Stern’s Remembrance came under attack by the Forces of Chaos, it drew the attention of the the 5th Company of the Dark Angels. The 5th Company's Master Zadakiel lead a squad of the Chapter’s deadliest warriors, the Terminators of the Deathwing, to purge the Traitors and their dark master. But a greater plan was in action, and it fell to the Deathwing's Sergeant Balthasar to defend his commander from the machinations of the Ruinous Powers. Unfortunately, many valiant Loyalist Astartes were killed, including their commander Zadakiel. This earned the Crimson Slaughter the undying enmity and wrath of the Dark Angels.

The newly-ascended 5th Company Master Balthasar vowed to hunt down the Renegades and bring their heads back to The Rock, the spaceborne Fortress-Monastery of the Dark Angels. The 5th Company was also accompanied in this task by members of the elite 1st Company, the Deathwing, members of the 2nd Company, the Ravenwing, and a Librarian by the name of Turmiel. The hunt for these Renegade Space Marines took place across a dozen worlds, until the Crimson Slaughter were finally tracked to the world of Bane's Landing where they were confronted by the Dark Angels 5th Company once again. Kranon the Relentless, the evil lord of the Crimson Slaughter, sought to use the Hellfire Stone to summon forth his daemonic masters and usher in an age of darkness. As the Dark Angels raced to stop him, a mighty conflict between the loyal Balthasar and the Traitor Kranon was in the offing.

Slaves To The Voices

The Crimson Slaughter are hunted. Like claws scratching down a steel hull or the slow and steady scratching away of tooth enamel to reach the nerve cluster within, the spine-shivering voices murmur to them. A hateful sound, the whispering is quiet at first, so quiet that a lone warrior might pay it little heed. Those voices build in intensity, swelling not only in their volume, but also in their power. As a steady drip will, over time, carve through the hardest rock, so too work the voices. Only by acts of inhumane butchery and utter annihilation can members of the Crimson Slaughter find release from this agony. Only in gore-drenched wars can they dispel that which bedevils them, dogging their every footstep. Only by turning entire worlds into abattoirs can they make the voices halt, a reprieve that is all too short-lived. In the beginning, this Renegade Chapter of Space Marines resisted their doom -- perhaps some still do. Most of their number, however, have cast off the fetters of service and deprivation. They have at last embraced the power and the madness, longing for the blissful, sweet release that follows slaughter. It is impossible to surmise who are more damned -- the warriors who are filled with self-loathing for their vile acts, or the ones who have developed a taste for it? Regardless, the power of the Warp spreads and the shadow of the End Times grows longer. The bells of doom clang and toll. And somewhere in the galaxy, or hidden just behind the veil that overshrouds it, the Crimson Slaughter are once more driven by their inner voices, once more on the hunt.

The Crimson Slaughter strike with the same precision and thunderbolt fury as the Space Marines. To the Imperial repertoire of lightning assaults and armoured spearheads are added lurching daemonic engines of war and waves of brainwashed Chaos Cultists. Alongside traditional Bolter and heavy weapons fire come sorcerous blasts and drizzling balefire. For close quarters onslaughts the Crimson Slaughter use the time-honoured Chainsword and Power Fist, but also lasher tentacles and claw pincers capable of snipping a Dreadnought in two. Against them, no defence line can hold, no bunker can remain intact. In the end, most of their foes break and run, hoping to hide in the ruins of their world. Yet whether the Crimson Slaughter hunt their prey by Auger-tracker, Warp trace or bloodscent, their end is always the same. None can hide, some are permitted to escape -- all must fall, broken and bullet-ridden. The doctrine of well-coordinated shock attacks has ever been the trademark of the Space Marines, but none employ it with the mastery of the Crimson Slaughter. With their hellish arsenal they harness surprise and dismay, wielding them in the same way a master swordsman wields his blade. Yet as horrific as their wanton violence is, as gut-wrenching as their genocidal purges are -- there is something else about the Crimson Slaughter that makes them more terrifying than the other myriad threats that stalk this brutal era. Strange things happen when the Crimson Slaughter arrive for battle. Unnatural, awful things that hardly bear description. Phantasmal spirits manifest out of shadows and premonitions of doom coalesce so thickly they hang like haze upon the air. The skies bleed, walls melt and the innocent contort and wrack their bodies into baleful angles while they howl to the heavens with the voices of the damned. Even mutes will plead for swift and merciful death, screaming out in languages they never knew.

Notable Members of the Crimson Slaughter

The Chaos Space Marines of the Crimson Slaughter wear dark red Power Armour with golden trim.  Prior to their fall, the Crimson Sabres wore dark red armour with white pauldrons. 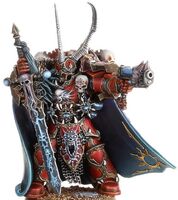 Kranon the Relentless, Chaos Lord of the Crimson Slaughter 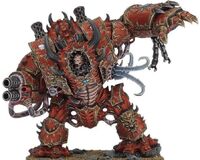 The Helbrute Mortis Metalikus in combat
Add a photo to this gallery
Retrieved from "https://warhammer40k.fandom.com/wiki/Crimson_Slaughter?oldid=202879"
Community content is available under CC-BY-SA unless otherwise noted.