The Contemptor-Galatus was designed to provide a mobile anchor point for a Legio Custodes battleline in the field. To this end, the Galatus was analogous to the specialised Sentinel Guard formations of the Legio Custodes, and is armed with a potent combination of a huge Galatus Warblade and vastly enlarged version of the Praesidium Shield.

The warblade allows the Contemptor-Galatus to swiftly and efficiently reap a murderous toll of any massed infantry assault at close-quarters, or indeed hack through armoured vehicles and monstrous xenos with equal ease. It is the defensive power of the hulking Praesidium Shield, however, that is the Contemptor-Galatus' most significant feature, as with it the already durable Contemptor chassis becomes nigh-on impregnable, even against the heaviest of firepower. 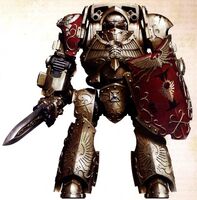 A Legio Custodes Contemptor Galatus-Dreadnought, Moritoi caste Prefectus Cetranio Shapura, perhaps the third or fourth of the Custodian Guard to be interred within the sarcophagus of a Dreadnought.
Add a photo to this gallery
Retrieved from "https://warhammer40k.fandom.com/wiki/Contemptor-Galatus_Dreadnought?oldid=337658"
Community content is available under CC-BY-SA unless otherwise noted.