By the outbreak of the Horus Heresy, the Contemptor-Achillus was the most widely employed Dreadnought pattern by the Legio Custodes, a general battle unit which combined phenomenal strength and speed with the echoes of the interned Custodian's own unmatched martial skill. It is unknown if the Contemptor-Achillus Dreadnought is still in use by the Adeptus Custodes of the 41st Millennium.

There is little short of utter destructive force able to fell a Custodian, and thanks to their Emperor-gifted preternatural resilience, there are few injuries that they cannot fully recover from given time. However, in those isolated cases where the body has been all but irrevocably destroyed but the Custodian's mind remains intact and their will to survive undimmed, internment within the cold and unyielding body of a Dreadnought is the next step. For the Custodians, only in death does duty truly end.

To this purpose, the few Dreadnoughts of the Legio Custodes were as singularly advanced as their other wargear, with unique variants of more common patterns available to the Legio Astartes refitted to the particular physiology of the Custodians themselves, and outfitted with Artificer-wrought weapons and systems.

Though they remained relatively rare, with less than perhaps a hundred Dreadnoughts of the Legio Custodes in service at the time of Primarch Magnus' folly and the subsequent attack on Prospero, they represented a phenomenally powerful concentration of force, most having had their chassis upgraded to the Achillus Pattern, a variant of the Contemptor manufactured with materials and technologies far beyond even the vaunted war machines of the Legiones Astartes.

An Achillus Dreadnought may be equipped with the following:

An Achillus Dreadnought may replace any of its Lastrum Storm Bolters with one of the following: 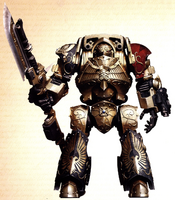 A Legio Custodes Contemptor Achilus-Dreadnought Excelcis Abram Hasrubal, Moritoi caste. He served as a part of the forces dubbed the "Talons of the Emperor" which formed part of the Censure Host sent to Prospero to bring the Emperor's wrath against Magnus the Red and the Thousand Sons for utilising sorcery in direct violation of the Edicts of the Council of Nikaea.
Add a photo to this gallery
Retrieved from "https://warhammer40k.fandom.com/wiki/Contemptor-Achillus_Dreadnought?oldid=337655"
Community content is available under CC-BY-SA unless otherwise noted.