"Let us show these simple-minded fools that hope is less than worthless."

The Company of Misery is a warband of Chaos Space Marines of unknown allegiance. Since the degradation of their gene-seed stocks in the 32nd Millennium, the formerly Loyalist Chapter known as the Desolate Brotherhood found themselves assigned to impossibly dangerous and undesirable duties, including assaults on Death Worlds, Space Hulks and quarantine zones.

Each time the Brotherhood believed they had won a reprieve, they were sent on an even more hazardous mission, plunging them into a spiral of dissolution and despair. After a catastrophe in the acid swamps of the world of Misery, the Chapter took a new name and left their duties to the Emperor behind, forever becoming sworn enemies of the Imperium and the illusion of hope.

The Company of Misery was first encountered by Imperial forces as servants of Chaos on the world of Maddean IV in the 37th Millennium. A recent search of Imperial records concerning this warband led to the discovery of connections in the data between the Company of Misery and the "Brethren of Mysery." The meaning of the latter term is ambiguous and whether this is another unit of Chaos Space Marines with some prior connection to the Company of Misery or some other formation is unknown at this time.

The Company of Misery wear predominately blood-red power armour with black trim and usually incorporate black flame patterns over half their armour.

They also adorn their armour with the usual heretical Chaos symbols and fetishes, denoting their allegiance to the Dark Gods.

The Company of Misery's warband badge is a red-arrow pointed upwards encircled by a black flame on a red background. The exact meaning of this symbol is unclear. 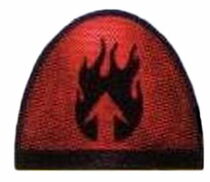 Company of Misery Warband Colour Scheme as displayed by Engvarr, the Destroyer of Dreams, First Blade of the Misericordians