A Command and Control Node is a sophisticated T'au artificial intelligence (AI)-assisted communications system used by a T'au Commander to communicate more effectively with other Fire Caste warriors around him, and better direct battlefield operations by linking together all nearby T'au targeting computers.

Though the sheer amount of information received can seem overwhelming, a T'au Commander who masters the flood of data can better orchestrate the firepower of his forces and drastically improve their accuracy.

A Command and Control Node is a signature support system available only to Battlesuit pilots of the rank of Shas'vre or higher.

However, the current rarity of this system among deployed Fire Caste units means that its distribution is usually limited to only one per Hunter Cadre. 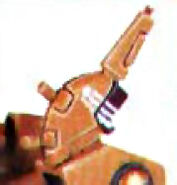 An older design of a Command and Control Node
Add a photo to this gallery
Retrieved from "https://warhammer40k.fandom.com/wiki/Command_and_Control_Node?oldid=358738"
Community content is available under CC-BY-SA unless otherwise noted.