Combi-weapons are a variety of Space Marine, Chaos Space Marine and Ork weaponry derived from the integration of multiple different weapon types into a single weapon.

There are two major types of Combi-weapons. The first combines two identical weapons into one larger weapon, giving the resulting weapon system a higher rate of fire and better accuracy by virtue of simply throwing more bolts, melta energy or plasma at the target.

The second is an amalgamation of two wholly different weapons into a single casing.

Only one component of the combined weapon can be fired at a time, and often the secondary weapon has very limited ammunition, enough for only one shot or a short burst of fire.

Such weapons augment the bearer's tactical flexibility, granting them a limited capacity to deal with threats that the main weapon would find hard or impossible to damage.

Astartes Combi-weapons are often Master Crafted Weapons and honored relics of their Chapter, venerated for their history and accomplishments and only entrusted to proven Veterans and officers.

Similar to the Storm Bolter, the Twin-linked bolter or Combi-bolter is simply two standard bolters that have been mechanically combined into a single weapon, rather than having been constructed that way in the first place like a Storm Bolter.

The Combi-bolter was much more common during the Great Crusade and Horus Heresy eras than at present in the Imperium and Chaos Space Marine Attack Bikes and Chaos Terminators are still often equipped with the older and less efficient Combi-bolter, though the Storm Bolter has replaced it in standard Imperial usage.

A standard bolter with a Flamer attached to the side, useful for close combat.

A standard bolter with an underslung Grenade Launcher that is most useful for assaulting or defending against a large group of foes.

A standard bolter with a Meltagun attached to its side, used as an anti-armour weapon.

A standard bolter with a Plasma Gun attached that is useful for a variety of tactical necessities.

A Combi-volkite is a Volkite Charger integrated with a standard Astartes bolter as the secondary weapon. This extremely rare Combi-weapon was only wielded during the Great Crusade and Horus Heresy eras by Space Marine Legion officers of the rank of praetor.

A Bolter with a Needler integrated within it, intended to be used against creatures like Daemons that are extremely difficult to injure. This Combi-weapon is used only by the Inquisitors and Acolytes of the Ordo Malleus. A variant of this Combi-weapon also serves as the primary weapon of Eversor Assassins.

A standard Bolter that has been integrated with a crossbow that fires wooden stakes. This weapon has been used by the Inquisitors and Acolytes of the Ordo Hereticus against rogue psykers.

A Condemnor Bolter, also called a Condemnor Boltgun, is an Imperial Combi-weapon that couples the iconic might of the Imperial bolter with a secondary launcher in the form of a single-shot crossbow armature that fires blessed silver stakes engraved with sigils of disruption.

These are particularly deadly to Chaos-corrupted psykers. A direct hit from the crossbow component of the Condemnor Bolter will therefore not only deal a severe physical wound to an enemy psyker, it will also send his or her power spiralling out of control, consuming the user in a storm of untramelled psychic energy.

The Condemnor Bolter is the ultimate man-portable implement of judgement against those who wield the unclean energies of the Warp. It is a weapon favoured almost exclusively by the Witch Hunter Inquisitors of the Ordo Hereticus such as Katarinya Greyfax.

The Shoota/Skorcha is a Kombi-weapon that provides the user with close-range firepower from a Flamer on a secondary, undermounted barrel beneath the Shoota's primary barrel.

The Twin-Linked Shoota is often used by Ork Warbosses. It provides greater accuracy than a standard Shoota. 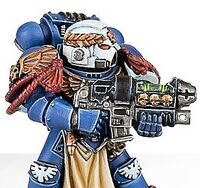 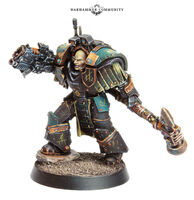