A Combat Shield is defensive wargear utilised mainly by the forces of the Adeptus Astartes. It is a lighter form of the Storm Shield often utilised by Space Marine Terminators during close combat assault actions.

During the Great Crusade era, Combat Shields were wrist-mounted shields or bucklers containing a small defensive energy field generator which enabled it to withstand great amounts of damage, while Boarding Shields were larger, bulkier versions of the same.

These were favoured by assault units employed by Legion Breacher Siege Squads for the additional protection they offered in the confined close-quarter fighting of starship boarding actions and siege attacks. Although these shields' smaller size and weaker defensive field meant they offered nothing like the protection offered by the prototype Legiones Astartes Storm Shields that were beginning to enter service at the time of the Horus Heresy, they remained a valued part of a Legion's Armoury.

Combat Shields are usually fabricated from plasteel, and incorporate a form of technology very similar to that of Imperial Power Weapons in the form of a miniaturised power generator which, when activated, emits a field of disruptive energy around the face and circumference of the shield. A Combat Shield is a compromise between flexibility and defence, trading the stronger protective force field and physical protection a Storm Shield's size offers for a free hand.

A Combat Shield is small enough to be strapped to the arm, leaving both hands free for another weapon to be wielded. As such, Combat Shields are used by many Space Marines wearing normal patterns of power armour about to enter melee combat or ranged combat where they will face an unusually high intensity of incoming fire. Combat Shields are crafted in many different forms and shapes depending on the culture and requirements of the Chapter that uses it.

For example, the Crimson Fists use coffin-shaped Combat Shields, the Blood Angels prefer that theirs be shaped into cruciforms, and the Iron Fists' Combat Shields take on the form of an armoured gauntlet similar to their Chapter icon.

A Deliverance Pattern Combat Shield of the Adeptus Astartes 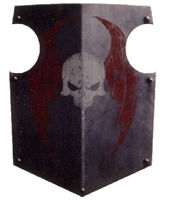