A Combat Knife is the ubiquitous back-up melee weapon for warriors all across the Imperium of Man, be they lowly hive city scum or the elite soldiers of a Planetary Governor.

During the time of the Great Crusade, combat blades were a catch-all category which described a variety of lethal hand-to-hand weapons favoured by the Space Marine Legions, the exact form varying from Legion to Legion by its culture and tradition.

They ranged from heavy razor-edged chain-bayonet, to adamantium Gladius and Thule-alloy battle-axes that would be too heavy for an unaugmented human to wield.

In the 41st Millennium some of these blades, such as the Catachan Fighting Knife, are designed for a specific purpose, whilst others, such as the ubiquitous Astartes Combat Knife, are more generic in nature.

This latter weapon is still utilised by Space Marines and Chaos Space Marines, though these blades are easily the size of a human sword. 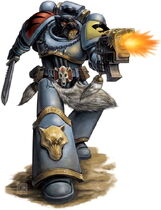 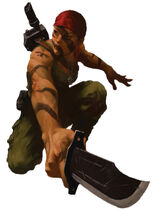 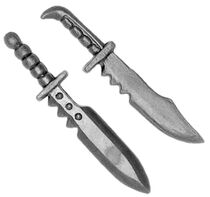