"Each time I think I have seen the worst predator on any Death World, that is when I know I am about to see something even more horrific."

The Clawed Fiend is an alien beast whose body is an amalgamation of the most predatory aspects of nature. Its size is tremendous and it can move that bulk of muscle and claw at almost preternatural speeds. The arms are long and muscular, giving it a tremendous reach. It also sports a long corded tail of bone and sinew, ending with a deadly spike of bone. The Fiend gets its name from the ferocious tips on each of its fingers and toes. Each claw is larger than an Ork’s finger and is cruelly shaped. The curved mass of chitin that forms each talon comes to a dangerous point and the edge is almost as sharp as a mono blade.

The head of the Fiend is frightening yet also perfect for its predatory role. The creature’s face is flat and bereft of hair, and protective leathery skin stretches thickly over its skull. Long fur surrounds the rest of the head, trailing to lengths along the back, arms, and legs. Its multiple eyes can see in several spectrums and its large ears can pick up the slightest of sounds no matter its environment. Beast House hunting reports (as well as recordings taken from pit fights) seem to indicate that it prefers a moving target, but these also show it is not fooled by a creature keeping absolutely still.

Even apart from its heightened senses, the Clawed Fiend’s combat prowess is truly remarkable. Stories of the creature’s strength amaze even the most jaded of xenologists and savants of the Expanse’s myriad fauna. Reports abound of the creature tearing through the largest of herd animals and slaying even the best-armoured of opponents. It is rumoured that a Fiend can even claw through ship bulkheads given time. A single swipe from this xenos has been known to literally take the head from a man’s shoulders.

While the exact reasons are as yet unknown, it has been proven that after a Clawed Fiend is wounded (no easy feat on its own) it enters an even more furious state. This has become a feature highlight in many a pit fight, with some gamblers wagering not only on when it makes its kill but also when it enters this condition of supreme frenzy. Some xenos researchers believe this is nothing more than a physical reaction to the creature’s injury as it strives to defend itself from attack, though most dismiss this as few other creatures display this behaviour to this extent.

Another theory is that a Clawed Fiend enters a hyper-aware state when injured, releasing extreme amounts of endorphins, adrenaline, and other chemicals to course through its body and initiating such terrifying carnage. Some studies of recovered corpses suggest that the creature is actually angered by the scent of its own blood, which contains a series of pheromones that enrage the creature. More disquieting studies go so far as to wonder if this behaviour is even due to natural evolution, or perhaps the result of careful breeding or gene-engineering. Veterans of encounters with a Fiend know simply to strive to kill it with the first shot and, if that fails, be prepared for fury beyond imagining.

The beast’s habitat is a matter of some dispute to those in the Koronus Expanse. While many assume that it originally came from Burnscour, given the famously deadly nature of both the beast and that world, variants of the xenos have also been found on several other planets including Gallant and Vaporius. A whitefurred Fiend was even killed on Lucin’s Breath and its pelt sold for a small fortune. There are numerous theories as to how this might have happened, such as the creatures being left on various worlds accidently during transport to Carnivoriums throughout the sector, or perhaps an unknown xenos menace has been using the creature to pacify targeted planets by killing off any native threats, be they sentient or bestial. There is even talk of them being able to warp-walk to other planets, although this theory is given no credit by any serious Biologis. Few know the truth, that the creature actually hails from the remote Donorian sector, far away from the Expanse or even the Calixis Sector. This secret is known only to a handful of xenologists, senior Rogue Traders, and others who guard the deepest mysteries of the Expanse for their own hidden reasons. What is known about the Clawed Fiend and its role in its ecology is certain. This creature, no matter where it is, rapidly rises to the position of an alpha predator. It eats anything when it is hungry, and it kills or destroys whatever gets in between it and its chosen prey. 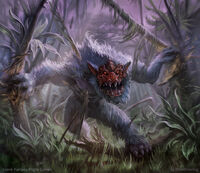 A Clawed Fiend mercilessly chassing down its prey through the jungle
Add a photo to this gallery
Retrieved from "https://warhammer40k.fandom.com/wiki/Clawed_Fiend?oldid=289922"
Community content is available under CC-BY-SA unless otherwise noted.