The Chosen of Nemeroth are a warband of Chaos Space Marines who were led by the infamous Chaos Sorcerer Nemeroth. Nemeroth led his Chaos warband in an attempt to conquer the Imperial Forge World of Graia located in the Segmentum Tempestus in the late 41st Millennium that was defeated by the Ultramarines 2nd Company under the command of Captain Titus. The Chosen of Nemeroth were known to make extensive use of daemons as allies.

The origin of the Chaos Space Marines in this warband; i.e., whether they were taken from one of the existing Traitor Legions, had originated as Loyalist Space Marines or had been drawn from other Renegade warbands, is unknown. Little else is known about this warband in Imperial records.

The Chosen of Nemeroth's Power Armour is coloured dark grey with red shoulder guards and golden trim. They also adorn their armour with the usual heretical Chaotic symbols and fetishes, denoting their allegiance to the Dark Gods.

The Chosen of Nemeroth warband's badge is the Unholy Octed, the eight-pointed Star of Chaos.

Because Warhammer 40,000: Space Marine takes place in an alternate universe, in which Captain Titus leads the Ultramarines 2nd Company instead of Cato Sicarius, it is unknown how the Chosen of Nemeroth transfer over into the mainstream Warhammer 40,000 universe, if at all. 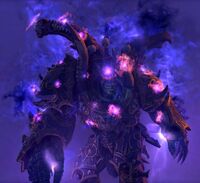 Nemeroth begins his transformation into a Daemon Prince
Add a photo to this gallery
Retrieved from "https://warhammer40k.fandom.com/wiki/Chosen_of_Nemeroth?oldid=325361"
Community content is available under CC-BY-SA unless otherwise noted.