Possessed of a darkling sentience of its own, the Chirurgeon is a complex part-sorcerous/part-technological device attached to former Emperor's Children Apothecary Fabius Bile's spine that extends its spidery limbs over his shoulders. It pumps life-giving ichor around his body, charged with the immortal energy of the Warp itself, resulting in vast variations in his strength and other physical abilities. It often gives him many of the immunities enjoyed by daemonkind, whilst boosting his physical abilities to superhuman levels.

On the battlefield, he might also bestow the questionable gift of his enhancements to others, with uncertain results. Sometimes the experiment is a success, creating psychotic killers superhuman even in comparison to their corrupted Chaos Space Marine brethren, but sometimes the subject's metabolism disintegrates in the face of the stress, resulting in instant death. This is a construction of Fabius' own invention and he has perfected it over a long period of time to more intimately bond with his body, enabling him to even perform surgery on himself with his own contraption. It has been said that the Chirurgeon is Bile's life's work and that it works to keep him alive.

Although Fabius Bile has made multiple clones of himself, it is unknown if there exists more than one Chirurgeon device. 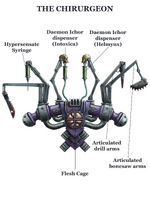 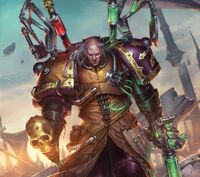 Fabius Bile with his Chirurgeon
Add a photo to this gallery
Retrieved from "https://warhammer40k.fandom.com/wiki/Chirurgeon?oldid=333445"
Community content is available under CC-BY-SA unless otherwise noted.