The Chimera is the standard armoured personnel carrier (APC) of the Imperial Guard and its chassis is the basis for a large number of other Imperial armoured vehicles such as the Basilisk artillery and Salamander scout vehicles. The basic Chimera is equipped with a Multi-Laser but can also be equipped with a variety of other heavy weapons, such as Twin-linked Heavy Bolters, an Autocannon or a Heavy Flamer. The Chimera also mounts a hull-mounted Heavy Bolter or Heavy Flamer and 6 hull-mounted Lasguns on the vehicle's sides which can be fired from the passenger compartment, allowing the infantry inside to fire at the enemy. It can carry up to 12 Guardsmen or 6 Ogryns. The Chimera also has amphibious capabilities, allowing it to take part in naval amphibious assaults or overcome watery obstacles like swamps and rivers.

The Chimera is the Imperial Guard's most commonly used armoured personnel carrier (APC). These nearly ubiquitous vehicles are extremely durable and practical, capable of mounting a wide array of support weapons. From within the armoured confines of the Chimera, an Imperial Guard infantry squad can use the vehicle's hull-mounted weapons to unleash a lethal wave of firepower into an enemy, protected from all but the most heavy weapons in return. Chimeras are also a powerful symbol of the might of the Imperial Guard and are fitted with a range of equipment, including searchlights, to locate the enemy, and massive bulldozer blades to clear all obstacles in the way of the Imperial Guard's heavier main battle tanks. With scanners and communication voxes, Chimeras are also suitable mobile bases of operations from which Imperial Guard officers can efficiently direct their forces.

Squads of Imperial Guardsmen mounted on Chimeras are usually called Armoured Fist mechanised infantry units. These squads lend speed and tactical flexibility to the otherwise often slow and rigid formations of the Imperial Guard. An Imperial Guard infantry regiment does not typically include any mechanised elements, as it is difficult for most Imperial Planetary Governors to obtain and then maintain the vehicles from the Adeptus Mechanicus needed for such units. Because of this reality, it is quite common for Imperial Guard commanders to attach Armoured Fist squads from other, fully mechanised regiments to provide fast-moving armoured transports to non-mechanised infantry units. Armoured Fist squads are able to respond quickly to emergent threats or move ahead of the main body of an advancing Imperial force and seize vital objectives until reinforcements from the infantry arrive. Enemy positions are quickly overrun as the heavy weaponry of the Chimeras, spitting a stream of fiery death into the packed ranks of the enemy, is accompanied by the charge of the infantry squads on-board who move down the vehicles' rear steel ramps and mow down all the survivors at point blank range. Armoured Fist squads have a reputation in the Guard for getting the job done and are in high demand by infantry regiment commanders. Typically deployed against the most heavily defended of enemy positions where the armoured protection of a Chimera is vital for a successful assault, it is no surprise that Armoured Fist squads have an even higher rate of attrition than standard Imperial Guard heavy infantry units.

Over the millennia, the Chimera has been pressed into service in a variety of different forms, proving its reliability over and over again. The Chimera is a highly versatile armoured vehicle able to operate in the most hostile environments faced by the Imperial Guard. Chimeras are amphibious vehicles and are able to move through dense swamps, deep marshes and even rivers. Many an enemy of the Imperium has been destroyed because its commander believed his flanks protected by such watery obstructions, only to find ranks of Imperial Guardsmen, supported by the potent anti-personnel weaponry of the Chimera that had transported them, driving into the very heart of his forces.

The most common variant of the Chimera armoured personnel transport, the Mars Pattern, is armed with a turret-mounted Multi-Laser, a hull-mounted Heavy Bolter, and six Lasguns controlled by the tank's passengers. Another common variant of the Chimera mounts a Heavy Flamer on the turret and sometimes the hull, or a turret-mounted Heavy Bolter which allows the Chimera to act as close fire support for infantry operating in dense terrain. The Forge World of Gryphonne IV produces its own unique variant armed with a turret-mounted Twin-linked Heavy Bolter, and while not very effective against enemy armour it is able to lay down a hail of explosive bolts that are highly effective against densely packed enemy infantry, such as the forces commonly deployed by the Tyranids and the Orks. Chimeras can also be equipped with an Autocannon which allows them to be used as light anti-vehicle tanks. Another variant derived from STC data discovered on the world of Kronus by Imperial Guard forces during the Dark Crusade allows a pattern of Chimera, known as the Kronus Pattern, to be built that replaces the normal Chimera turret with one similar to the Space Marine Predator tank turret, including its Autocannon. The Chimera can also be outfitted with Camouflage Netting, Extra Armour Plating, track guards, improved communications equipment, a Hunter-Killer Missile Launcher, a Pintle-mounted Heavy Stubber or Storm Bolter, rough terrain modifications, a Dozer Blade, a Searchlight, or Smoke Launchers.

Known Users of the Chimera

Notable Users of the Chimera

The Chimera chassis is the basis for many other Imperial armoured vehicles, including the:

A basic Mars Pattern Chimera of the 6th Magdellan Armoured Regiment, armed with a turret-mounted Multi-Laser

A Chimera of the 3rd Tallarn Armoured Regiment, armed with a turret-mounted Autocannon and equipped with a dozer blade

A Chimera of the 193rd Valhallan Armoured Regiment, it is armed with a turret-mounted Heavy Flamer

A Chimera of the 17th Tallarn regiment, part of the first Infantry platoon (Armoured Fist Company)

A Chimera of the 114th Cadian Regiment, deployed during the Taros Campaign

A Chimera belonging to the Inquisition

A Chimera used by the Inquisition to transport Inquisitorial Storm Troopers 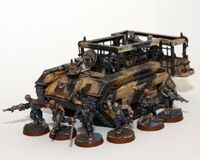 A Chimera used by Imperial Penal Legions; the soldiers are kept in a cage on the vehicle until they are brought to battle

A Chimera as part of an armoured convoy

A Chimera as seen from the rear in operation on Betalis III; this Chimera has earned a cast iron Aquila as a sign of its crew's proven loyalty
Add a photo to this gallery
Retrieved from "https://warhammer40k.fandom.com/wiki/Chimera?oldid=304257"
Community content is available under CC-BY-SA unless otherwise noted.