The Charnel Guard is a Loyalist Space Marine Chapter and a Successor Chapter of the Blood Angels suspected to have been raised during the Third Founding though they are not acknowledged as a member of the Sanguinary Brotherhood by their ancestral Chapter.

This reclusive, fleet-based Chapter's chronicle threads through many dark passages of the Imperium's history.

The Charnel Guard are known to seal themselves away in vast stasis crypts when not on campaign, and the Chapter's Armoury holds countless examples of weapons rarely seen in the 41st Millennium.

Evidence for this lies in the number of ancient war relics the Charnel Guard is known to possess, such as a Fellblade super-heavy tank and at least two other super-heavy tanks of similar provenance. In particular, this Chapter makes use of a sizable fleet of Fire Raptor gunships, a specialised variant of the Storm Eagle.

This Chapter is most notable for having been a member of the Maelstrom Warders, an alliance of Space Marine Chapters dedicated to the defence of the volatile and dangerous region of the Ultima Segmentum of the galaxy known as the Maelstrom Zone from the Chaos Renegades of the nearby Warp rift of the same name.

The Charnel Guard are also part of an alliance of Blood Angels successors known as the "Triarchy" that includes the two successors of the Blood Eagles Chapter, the Angels Numinous and the Red Seraphs.

The Triarchy dedicated itself to battling the foes of the Emperor wherever they could be found in the Imperium Nihilus after the birth of the Great Rift cut the Imperium in half during the Era Indomitus.

At some point in their history, the Charnel Guard formed an alliance with two other Blood Angels successors, the Angels Numinous and the Red Seraphs, to form what was called the "Triarchy."

Both of those Chapters were themselves the direct successors of the Blood Eagles, a Blood Angels successor that had torn itself in half during an unknown conflict. The two surviving halves of the Blood Eagles then formed their own Chapters, which became the Angels Numinous and the Red Seraphs.

Though now allied through the Triarchy, the Angels Numinous and Red Seraphs Chapters were noted to agree on nothing.

The Chapters of the Triarchy used the ritualistic phrase, "We are Three, drawn from Two, born of One," to define their traditional partnership and kinship to one another.

It was a tradition of representatives of those three Chapters to meet at the abandoned homeworld of the Blood Eagles to determine a course of action that would involve the entire Triarchy. The ritual words were always spoken by the Triarchy representatives before any conclave could begin.

At one such conclave held after the birth of the Great Rift during the Era Indomitus, Ynoch of the Red Seraphs, Jagudir of the Angels Numinous and Mordath of the Charnel Guard gathered to discuss how the Triarchy would deal with their growing isolation in the Imperium Nihilus, as the Chapters were unable to cross the Great Rift and were coming under increasing threat from xenos and the forces of Chaos.

They decided to reject their traditions, and rather than defend their shrinking domains they would seek out the foes of the Emperor in the Dark Imperium and fight aggressively even if it meant the death of their Chapters. And they promised that if they could find Roboute Guilliman's Indomitus Crusade, they would join it.

They also seem to develop the appearance of a partially dead or decaying body, including grey skin, breath and skin that smells of rotting flesh, and eyes that are completely white, showing no visible pupils.

The Chapter fleet of the Charnel Guard is known to consist of the following warships:

The Charnel Guard's Chapter colours are known to be primarily black and maroon. Their power armour is fashioned to mimic the polished black of volcanic glass.

The Charnel Guard's Chapter badge is a black stylised fleur-de-lis cross, adorned with lily petal flourishes at the arm-ends, outlined in white.

A maroon, diamond-shaped lozenge is centred on the cross with a fanged skull in its centre. 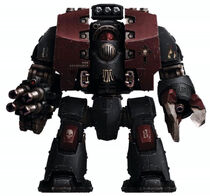