A Chaplain Dreadnought, also known as the Chaplain Venerable Dreadnought, is a variant of the Castraferrum Dreadnought combat walker used by the Chapters of the Adeptus Astartes. Dreadnoughts are cybernetic combat walkers that house the mortal remains of a fallen Space Marine hero so that he may continue fighting for the Emperor of Mankind and his Chapter even after his body has been fatally crippled.

A Chaplain is a specialist officer of the Adeptus Astartes that serves as the appointed spiritual leader of a Space Marine Chapter. Chaplains are the warrior-priests who administer to the spiritual well-being of their fellow Battle-Brothers, instilling in them the values and beliefs of the Chapter and promoting the veneration or, in much rarer cases, the actual worship of the Emperor as a god.

When a Chaplain falls in battle and is damaged beyond repair he may be placed in a Dreadnought, as Chaplains offer their Battle-Brothers unparalleled morale benefits. A Chaplain afforded the honour of being encased within a Dreadnought chassis becomes a highly respected living shrine to the glory of the Chapter. Chaplain Dreadnoughts are unwavering in their faith and conviction and show righteous hate for the enemies of Mankind. They will take to the field of battle with their Vox and speaker systems shouting a booming oratory that stokes the fires of wrath in the hearts of their Battle-Brothers.

Much like Venerable Dreadnoughts, Chaplain Dreadnoughts are veterans of countless wars and have gained vast amounts of knowledge and insight into the ways of war over the course of their long lifetimes. These warriors have such faith in the Emperor that they become almost impervious to damage, and can only be stopped by the complete and total destruction of their armoured sarcophagus. These Dreadnoughts will use their wisdom and spiritual teachings to shape generation after generation of new Space Marines for their Chapter.

These weapons are most common on Dreadnoughts of any type that utilise the Mark IV Dreadnought chassis. There are rarer patterns of Dreadnought Powerfists that take the shape of a four-fingered human hand, and rarer ones still that feature a full five fingers. These rare patterns allow Dreadnoughts the use of an opposable thumb, which provides a greater degree of manual dexterity when picking up objects or enemies.

Chaplain Dreadnoughts can take any of the long-range weapons used by other Dreadnoughts, such as twin-linked Lascannons, Heavy Bolters, Heavy Flamers, or Autocannons, along with weapons such as Plasma Cannons, Flamestorm Cannons, Assault Cannons, and Multi-Meltas. The combat walker can forgo the use of long-range weapons entirely and be armed with two Dreadnought Close Combat Weapons.

Chaplain Dreadnoughts are outfitted to appear similar to the common iconography of a Space Marine Chaplain's Power Armour, so that they are all black in colour and possess a skull-shaped helmet and other skeletal ornamentation. These Dreadnoughts can be equipped with both Searchlights and Smoke Launchers and any other upgrades that may be unique to their respective Chapters.

The following are all known Imperial Chaplain Dreadnoughts:

A standard Chaplain Venerable Dreadnought is armed and equipped with:

A Chaplain Venerable Dreadnought may replace one of its Dreadnought Close Combat Weapons (Dreadnought Powerfists or Power Claws) with built-in Storm Bolter with any of these options: 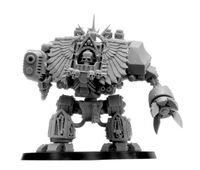 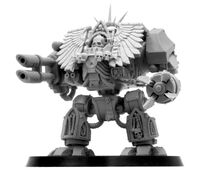 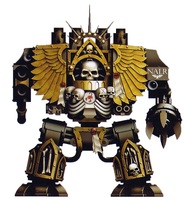 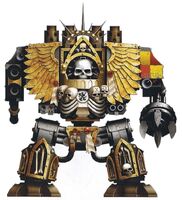