A Chaos Terminator is a Veteran Chaos Space Marine who wears a suit of Tactical Dreadnought Armour (Terminator Armour) and serves as one of the Traitor Legions' most powerful infantry shock troops.

Sundered and cast out from the Imperium of Man, having turned their backs on the Emperor of Mankind, the Chaos Space Marines of the Traitor Legions know that there can be no peace for them, no forgiveness nor absolution. They are wholly committed to the path of damnation that they have trod for 10,000 standard years, for good or ill.

These genetically-enhanced transhuman warriors have all the strengths and skills of their Imperial counterparts, to which are added the power of Chaos and a brutal devotion to their patron Chaos Gods.

The armament of the Heretic Astartes differs little from that of the Loyalist Space Marines. They possess the same primary weapons: Bolter, Bolt Pistol, various heavy weapons, knife, sword or axe; but some also possess thousands of standard years of combat experience, which turn these warriors into nigh-unstoppable killing machines.

The Chaos Space Marines also possess the dreaded and rightly feared Terminator Armour first deployed into the hands of the Space Marine Legions at the end of the Great Crusade in the late 30th Millennium. These highly coveted and rare suits of power armour are usually only worn by the Veteran Chaos Space Marines known as Chosen or an Aspiring Champion of Chaos.

Since the time of the Horus Heresy the Chaos Terminators' brutal reputation as fearsome, unrepentant killers has spread throughout the galaxy.

Chaos Terminators form the elite of their masters' Heretic Astartes warbands, for though they are ponderous compared to their standard Power Armour-clad comrades, nothing short of a dedicated anti-tank laser can stop a Terminator in full stride. These seasoned killers often act as the personal guards of an esteemed Champion of Chaos, enforcing the commands of their leader with pitiless efficiency and taking their pick of the spoils after each victory.

They tend to be egotistical, brutish and crude, using their physical prowess and the favour of their lord to intimidate other members of their warband. Far from resenting such behaviour, most Chaos Space Marines simply plot to bring about the day when they can abuse such power for themselves.

The development of Terminator Armour, as Tactical Dreadnought Armour eventually became known, was well underway by the time the Horus Heresy erupted in the early centuries of the 31st Millennium.

These heavily armoured suits of power armour had become widely available by the time the Traitor Warmaster Horus struck at Isstvan III. According to fragmented records of the Adeptus Mechanicus, Terminator Armour was originally designed to become the ultimate Space Marine power armour, and was originally envisioned to replace the older suits.

However, as the Horus Heresy drained the resources of the Imperium, Terminator exo-suits became increasingly rare, for they were exceptionally difficult to create and maintain. In addition, during most battles their bulk became a disadvantage against the lighter power-armoured warriors who easily outmanoeuvered them.

These suits were still highly sought-after, however, as Terminator Armour proved adept at bloody, short-ranged battles waged in cramped conditions such as boarding actions and ship-to-ship engagements, hive cities and tunnel-fighting.

After the Traitor Legions were driven from the realms of Mankind into the Eye of Terror, suits of Terminator Armour became even rarer among them.

As each Legion of Chaos Space Marines fought one another for dominance in the endless internecine struggles for dominance or favour of their patron Chaos Gods, many of their most prized relics and artefacts of technology were lost due to attrition.

As the Heretic Astartes further succumbed to the powers of the Warp, much of the organisation and structure of their former Astartes Legion or Chapter has disappeared.

Therefore, suits of Terminator Armour have become their most prized wargear -- carefully maintained and guarded jealously by those fortunate few who have been in possession of these rare examples of advanced technology from a bygone era.

The armour of the Traitor Legions reflect the turbulent times of the Horus Heresy when older marks of power armour were used to replace losses, as well as scavenging and cannibalising armour from the battlefields. Often times they feature distinctive studded and riveted plasteel plates rather than the smoother ceramite armour of later designs.

Many Chaos Space Marines individualise their armour with crests, horns, skulls and chains. Quite often a Chaos Space Marine's armour will have been changed by long exposure to the Warp -- possibly sprouting spines or bony ridges, become covered in a layer of scales, or flicker with coruscating Warp energy.

Competition for new or replacement armour parts is especially fierce when it comes to Terminator Armour.

Chaos Terminators stand in great favour with the leader of their warband. Many of them are Aspiring Champions of Chaos who have left their brethren to elevate themselves in the eyes of the Ruinous Powers.

The scarcity of Terminator Armour is such that sometimes an Aspiring Champion can only claim a suit for himself by killing the current wearer through ritual combat or by more devious means.

Chaos Terminators are often employed as the elite personal guard of an esteemed Chaos Champion. Within the Chaos Space Marine warband they are the ones who enforce the will of their leader and are granted the pick of the spoils of victory.

As any Space Marine in service to the Emperor will recount, a suit of Terminator Armour of any of the known patterns is an ancient and sacred artefact to be reverently maintained.

The armour is massively bulky and contains a full array of fibre bundles and adamantium rods to support the heavy-gauge plasteel and ceramite plates that form the outer carapace.

Legend has it that the Crux Terminatus emblazoned on each suit's shoulder incorporates a fragment of the Emperor's own blessed armour. Each Chapter can muster only a hundred or so of these suits, and not all of their systems are properly understood, as their workmanship is from a bygone age. Nonetheless, those Veteran Astartes given the honour of wearing one of these masterpieces to war are the most formidable foot soldiers in the Imperium.

The war suit worn by a Chaos Terminator, on the other hand, is as corrupt and twisted as the Traitor within. Where once Imperial insignia were emblazoned upon its pauldrons and greaves, leering death's heads and the Eye of Horus now stare accusingly at those brave enough to look upon them.

Spiked trophy racks protrude from massive shoulders, the skulls of the enemy a barbaric testament to their wearer's martial prowess. Helmets have grown into bestial masks that sprout great tusks and razored horns, many of which have fused directly into the skulls of their wearers.

When twinned with the stomping, heavy gait typical of all Terminators, these adornments conspire to give the impression of a slab-muscled, predatory hulk searching for its next meal.

The wargear of Chaos Terminators varies dramatically, including weapons taken as trophies from slain foes, and arcane equipment carefully maintained since the Horus Heresy. Chaos Terminators usually use ranged weapons, typically a Combi-weapon of some type such as a Combi-bolter, and a chainaxe, Power Maul, Power Claw, Power Axe or other powerful close combat weapon.

This deadly combination of devastating anti-personnel firepower and clout in close quarters fighting makes a Chaos Terminator a deadly and highly-feared opponent. Some of these Chaos Space Marines carry heavier and more powerful weapons such as the double-barrelled Reaper Autocannon and the terrifying Heavy Flamer to provide supporting fire for their comrades.

Other Chaos Terminators enhance their abilities in close combat and wield a pair of Lightning Claws with which to carve up an enemy, or use a Chainfist for cutting through armoured vehicles and starship bulkheads.

A Chaos Space Marine wearing Terminator Armour of any of the known patterns can move and operate with remarkable freedom and agility considering the sheer mass of the actual armour, which provides as much protection as an armoured tank hull.

Chaos Terminators are not the swiftest of troops when it comes to reaching the enemy's battle lines. To counter this, they often employ the use of a Chaos Land Raider as a transport vehicle that can smash open the fortifications of the enemy. This allows its murderous passengers to reach the foe without having to first navigate the fierce bombardments so often arrayed against them.

Much like their Loyalist counterparts, Chaos Terminators can also be teleported directly into battle from the vaulted halls of their warships using arcane technology dating back to the time of the Great Crusade, though they are as likely to use potent Chaos sorcery for such a strike as they are ancient science.

The sudden appearance of a unit of Chaos Terminators within the enemy's headquarters has spelled the bloody end of many a protracted campaign. 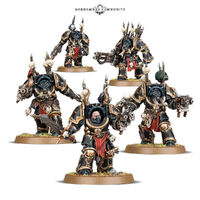 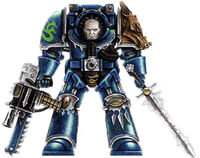 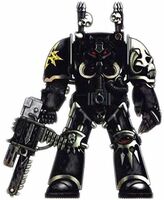 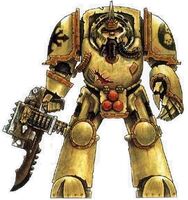 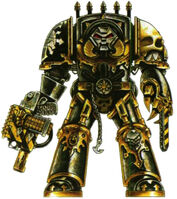 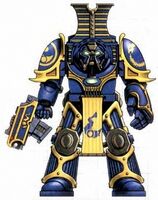 A Chaos Terminator of the Sons of Damnation, a warband comprised of a single squad of the Word Bearers Traitor Legion. 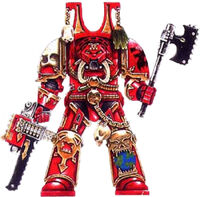