Chaos Space Marine Raptors are the dedicated assault infantry of the Chaos Space Marine Traitor Legions. Raptors consider themselves to be elite shock troops similar to the warriors who comprise the Loyalist Space Marine Assault Squads, although they are far more egotistical and self-centred.

As Raptors are used to strike at the weakest point in an enemy line, this tactical usage has been expanded into an outright philosophy dedicated to the concept of preying on the weak, making them vicious hunters.

The cruel terror troops known as Raptors consider themselves the elite of the Heretic Astartes warbands. Their murder squads epitomise what has become of the Assault Marines of the Traitor Legions.

Though they were once rare and highly valued Imperial troops, the Raptors have fallen to their own pride and lust for violence. They now roam the galaxy as merciless hunters, relishing the fear they cause as they plummet screaming out of the skies.

Within the Space Marine Legions of old, Jump Pack troops were relatively rare. Horus knew well the value of the surprise attack, and such was his military genius that the arrival of his Assault Marines was the turning point in dozens of critical battles.

They would be held in reserve until the enemy exposed a weakness in its battle line, whereupon entire Jump Pack companies would plunge into the fray, breaking the foe's defences wide open with Meltagun, Flamer, Bolt Pistol and chainsword.

Perhaps it was their habit of preying on lesser warriors that led to the slow corruption of the assault companies that sided with Horus. Over time, those of their number who ventured into the Eye of Terror grew to love the exhilaration of soaring through the skies a little too much.

They became addicted to the thrill of looking down upon the warriors beneath them, and as the rudimentary Machine Spirits of their Jump Packs also became corrupted, these corrupted warriors melded with their wargear until the power of true flight became theirs.

Now there are Raptors whose blood is high-octane fuel that runs through body and wargear alike, whose eyesight is so sharp they can pick out prey from several Terran miles distant, or who can strike from above with the force of a meteor.

The Chaos-tainted power armour of a Raptor reflects his predatory nature, usually mimicking the appearance of a vicious bird of prey or swooping Daemon.

Altered Vox-casters protrude from helmet and battle-plate, amplifying the raw hatred of their war cries and better enabling their wearers to terrify their enemies into submission before the final strike.

The Raptors' predilection for sadism and psychological warfare is a dark reflection of the Assault Marine's traditional role. Simple killing is no longer enough.

The Raptors want not only to tear apart their prey, but to instil terror in them beforehand -- they will go to great lengths to see their grovelling prey's face distorted with fear before the final blow is struck.

Wherever the Raptors prowl, ghostly voices and horrific threats are broadcast into enemy communications networks, the skies are haunted by daemonic faces, and evil shrieks echo through the night so that their sleep-deprived quarry is driven to the edge of madness.

Needless to say, the Night Lords, a Traitor Legion infamous for their terror tactics, attract a great many Raptors to their banner.

Raptors are seen as preening, self-indulgent egotists by many of their brethren, but their unquestionable skill in battle means that Champions of Chaos will gladly enlist them nonetheless.

There is no battle line or garrison that cannot be demoralised and subsequently shattered by a pack of Raptors. Only once the prey is at its most vulnerable will the Raptors take their grisly prize.

Raptors are a debased form of the Jump Pack-equipped Legion Assault Astartes who fought as part of the Space Marine Legions who turned Traitor during the Horus Heresy of the early 31st Millennium. At that time Jump Packs were a rarity, and they were usually only issued to elite units of Space Marines.

These earlier patterns of Jump Pack were rather more sophisticated and efficient than the ones commonly used by the Space Marines of the Imperium in the 41st Millennium, being considerably lighter and less bulky, while at the same time having a higher thrust to mass ratio which allowed slightly longer and higher jumps to be performed.

Such was their complexity, however, that only the most skilled Tech-adepts of the ancient Mechanicum could attempt their construction, and with time even this ability was lost, so now all that can be done is to maintain those packs that still remain.

If it had not been for the discovery of the Standard Template Construct (STC) for the pattern of Jump Pack currently used by the Imperium, by an unknown Tech-priest on the backwater planet known only as DH2, it is likely that the Raptors would have been the only Space Marines still using Jump Packs in the 41st Millennium.

At the time of the Heresy, though, very few units of Space Marines were equipped with Jump Packs. In much the same way that Terminator Armour is still seen as a badge of honour amongst Astartes, being a member of a Jump Pack-equipped assault unit was a source of pride and prestige.

Such troops, being rare, were employed only for highly specialised and often highly dangerous missions. All of these factors combined to instill a unique esprit de corps amongst the warriors of Jump Pack-equipped units, and it was this spirit of dangerous individualism which was to have terrible consequences during the Heresy.

When Horus began his revolt against the Emperor, his armies included over half of the Jump Pack-equipped Legion assault units of the huge Space Marine Legions of those days.

Although small as a percentage of the overall size of Horus' army, there were still tens of thousands of such Astartes under his command.

Like all of the Space Marines in the Traitor Legions, these troops were slowly and insidiously corrupted by the Chaos Gods so that, step by step, they were turned into something all together the opposite of what they had once been.

Where there had once been proud, noble Space Marine warriors, there now stood the vain, selfish creatures that quickly became known by both themselves and their enemies simply as Raptors.

It would seem likely that the Raptors became dedicated worshippers of one of the Chaos Gods, and that their appearance reflects this in some way, just as the Thousand Sons, Khornate Berserkers and Plague Marines all have an appearance which reflects aspects of their patron Chaos God.

However, exactly who the Raptors worship is by no means clear; it could be one of the major Chaos Gods, such as Tzeentch or Slaanesh, but is more likely to be one of the plethora of minor Chaos deities, who, while not as powerful as the major powers, are every bit as dangerous and evil.

Whoever they worship, as time has passed the Raptors have become ever more corrupted, their armour mutated by some strange force of Chaos so that it no longer bears anything other than a passing resemblance to the noble suit of power armour it once was.

At the same time, the pride and spirit of the Space Marines that became the Raptors has been perverted into a vain belief in their own superiority over all other creatures, which is often expressed in acts of unspeakable cruelty.

Many who join the ranks of the Raptors modify their armour to give themselves a more terrifying appearance, and the Raptors often fit amplifiers and Vox-casters to emit terrifying sounds used to disorient their enemies, making them easier prey.

Their power armour can be highly stylised, mimicking the appearance of a vicious bird of prey or swooping Daemon. They always wear their stylised, ancient pattern of Jump Packs which are identifiable by their arched intakes and thrusters. They are armed with bolters or with the traditional Assault Marine weapons of a Bolt Pistol and a chainsword.

Raptors sometimes are armed with Flamers or Meltaguns to aid in different situations. Whatever they are armed with, Raptors descend upon positions and deal death and destruction wherever they land. Many other Chaos forces see them as egotistical and self-indulgent, which often stirs up rivalry.

Raptors do not always interact with other members of their Chaos Space Marine warband, giving them a greater air of arrogance. While the Raptors may think of themselves as an elite, many other Chaos Space Marines consider them to be preening, self-indulgent egotists.

Whatever their personal feelings on the matter, Champions of Chaos still recognise the Raptors' merit in combat and some even stoke the fire of division between the members of a Raptor Squad to get rid of the weakest members of the squad, weeding out the least skilled, and leaving behind only the strongest warriors.

As time has passed, the Raptors have become ever more corrupted, their armour mutated by some strange force of Chaos so that it no longer bears anything other than a passing resemblance to the Power Armour it once was. At the same time, the pride and spirit of the Space Marines that became the Raptors has been perverted to a vain belief in their own superiority over all other creatures, which is often expressed in acts of quite unspeakable cruelty. Although the Raptors will fight alongside other Chaos Space Marines, their haughty attitude and obvious disdain makes them unpopular, to say the least -- a feeling that is reinforced by the Raptors' tendency to desert as soon as they have gotten what they want. And what they want appears to be nothing other than death, destruction and the simple infliction of pain and suffering for its own sake. They circle the battlefield, swooping down on the weakest and most vulnerable target they can find, and then depart leaving death in their wake before the enemy can retaliate. These fell servants are truly amongst the most loathsome of all the followers of the Chaos Gods. Many Raptor warbands frequently operate only amongst their own kind, forming Raptor Cults. These Cults usually only consist of those veteran warriors who fought for the Warmaster Horus ten millennia ago.

The thrill of false flight afforded by a Jump Pack can be addictive, especially to a Chaos Space Marine. Those who have delusions of godhood relish looking down on their prey as if they were little more than insects. As with all things that feel the caress of the Warp, like attracts like, and the Raptors of the Traitor Legions only truly respect those who can lead from above. There exist amongst the armies of Chaos those warhosts that attack from on high without exception, a dark mirror of the Adeptus Astartes tactic of launching a planetstrike from low orbit to ensure the maximum impact.

Those Chaos Lords who go to war upon a Jump Pack's twin pillars of flame are often attended by large warbands of Raptors and Warp Talons. The most influential of these leaders marshal as many airborne Daemon Engines to their cause as they can, using Heldrake Fear Squadrons to eliminate the enemy's anti-air capabilities before the main strike descends. The Night Lords in particular make extensive use of such forces, for they revel in the terror caused by what their victims perceive as a dark flock of vengeful furies from myth come to rend their flesh and claim their souls. 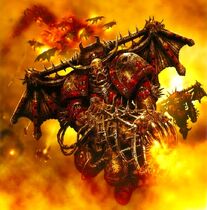 Chaos Khornate Raptors swoop down upon their enemies 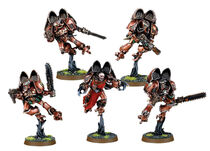 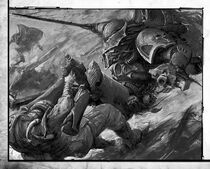 A Chaos Raptor in combat 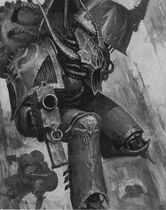 A Raptor leaping down towards the foe

A Warp Talon in combat 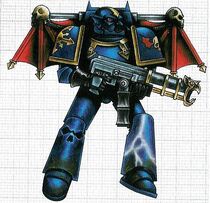 A Night Lords Raptor of the Bleeding Eye Warband
Español
Community content is available under CC-BY-SA unless otherwise noted.
Advertisement