A Chaos Lord is one of the most powerful of the Champions of Chaos who often serves as the commander of a Chaos Space Marine warband and the other forces of Chaos. A Chaos Lord is usually, though not always, a Heretic Astartes himself.

They are not necessarily those who rose through the ranks properly in a hierarchical fashion, but are often those most blessed by the Chaos Gods or simply the most powerful or charismatic individuals among the forces of Chaos.

The greatest of the Champions of Chaos become Chaos Lords and are often granted hideous mutations and physical alterations by the Ruinous Powers to further their cause. Chaos Lords are so powerful as to be able to bind the other forces of Chaos to their will, although this often brings a dangerous position as advancement among the forces of Chaos is commonly achieved through the death or murder of another Chaos Lord or Champion.

Some Chaos Lords lead through brute strength, others through cunning and some are maniacs bent solely on self-aggrandisement. Others are true-believing worshipers of Chaos and possess a zealous dedication to the cause of the Dark Gods.

A Chaos Lord is ultimately always a tyrannical warrior-king who lives to bathe in the blood of worlds. He strives to bring whole star systems to their knees in the name of his patron deities. Typified by merciless ambition and fierce pride, many of these champions of disorder were once noble Chapter Masters and captains of the Adeptus Astartes, but long Terran years of unremitting war have twisted their souls beyond recovery.

It takes a being of exceptional willpower and personal magnetism to unite the warbands of Chaos Space Marines lurking in the Warp, and even then, a would-be warlord cannot be everywhere at once. Only those marked for greatness by the gods themselves can claim support from Heretic Astartes, mortals and Daemons alike.

All Chaos Lords are imposing in stature. In the case of Chaos Space Marines, their genetically-enhanced transhuman physiques have been made even more impressive by the protean caress of the Warp. Their wargear is often as outlandish as their physical appearance; a Chaos Lord may hack his foes apart with a massive chainaxe, blast them with an ancient combi-weapon, or slice open their vehicles with a screaming Daemon Sword.

Regardless of affiliation, these conquerors of worlds invariably prefer to lead from the front. There, the visceral thrill of war is strong enough to eclipse any glimmering sense of betrayal they may feel as they rend their Loyalist brothers limb from limb.

Possessed of a wrath so intense it often clouds their vision, the Chaos Lords of Khorne lead by example. Each Chaos Lord is a looming brute in gore-stained armour. Many such lords retain their intellect and conqueror's instincts, but their blood-greed is so strong that, upon the battlefield, they could easily be mistaken for mindless savages. It matters little, for so frenzied are the warriors that follow them that they are lost to reason; for lord and follower alike, only the sight of blood holds sway.

Tzeentch grants his lordly devotees access to an almost limitless supply of sorcerous power. Such beings have a supernatural ability to outguess their foes. They often manifest arcane mutations such as haloes of dark flame, third eyes or crystalline bodies, whilst mystical auras protect them from harm, transmuting attacks into harmless energy. Their plans are so labyrinthine that only the insane may even begin to understand them.

The lords of Nurgle are lumbering, filth-encrusted hulks that devote their lives to spreading disease across the stars. Their guts are bloated sacs of putrid gas and rancid fat, and their sagging skin has the waxy pallor of a corpse, but their resistance to injury is legendary. These devout sons of Grandfather Nurgle revel in their foulness, leading Heretic and Daemon alike to war.

Chaos Lords of Slaanesh are gifted with strange sensory organs and mood amplifiers that allow them to better savour the shocking stimuli of open warfare. The life of such a lord is a whirlwind of excess that inspires his followers anew with every battle. His mind reacts so swiftly that he can fight with blurring speed and dexterity in the pursuit of ever-greater sensation -- and the pleasure it brings.

Mark of the Chaos Champion

Chaos Champions often bear upon their flesh the Mark of one of the four Chaos Gods or of Chaos Undivided. Champions of Khorne are berserk savages and value physical strength and direct melee combat over cunning and strategy. Tzeentch's Champions are very knowledgeable on a wide array of matters and many are Chaos Sorcerers.

The Champions of Nurgle are the most distorted and physically corrupted of Chaos' followers, their bodies dulled from the constant pain of the diseases they bear, enabling them to endure extreme physical injury with little trauma. Slaaneshi Champions are those who seek out the most intense sensory experiences possible due to the extraordinary pleasure this provides them. They are physically the fastest warriors of Chaos due to their hyper-sensitive minds and often surgically-altered or mutated reaction times.

At present, a Sorcerer Lord is a Chaos Lord who possesses psychic powers and is more often than not a devotee of Tzeentch, the Changer of Ways and Chaos God of sorcery.

In the 3rd Edition of Warhammer 40,000, there was a different structure for Chaos Space Marine commanders. They could be psykers or mundanes, and the rank of "Chaos Lieutenant" existed as the second-in-command of a Chaos Space Marine force.

Since the release of Warhammer 40,000 4th Edition, however, Chaos Sorcerers have been moved to a role more resembling that of the Loyalist Space Marines' Librarians within a Heretic Astartes warband rather than possessing variable psychic abilities.

If wearing Terminator Armour, the Chaos Lord makes use of the following wargear:

No known Chaos Lords begin with the letter "O".

No known Chaos Lord begins with the letter "Q".

No known Chaos Lord begins with the letter "W".

No known Chaos Lord begins with the letter "X".

This is a select and incomplete list of sources; for more, see each individual Chaos Lord's own page, if appropriate.

A Chaos Lord of Khorne

A Raptor Chaos Lord outfitted with a Jump Pack

A Chaos Lord in Terminator Armour 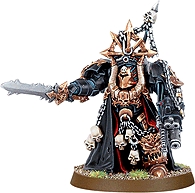 A Sorcerer Lord of Chaos in Terminator Armour 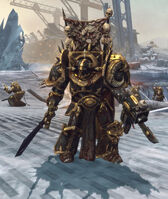 A Chaos Lord of the Black Legion
Español
Community content is available under CC-BY-SA unless otherwise noted.
Advertisement