The Chaos Dreadclaw may be a variant or descendant of the Anvillus Pattern Dreadclaw Drop Pod, that was widely used during these times. Dreadclaws, like the Loyalist Space Marines' Drop Pods, are used to rapidly deploy squads of Chaos Space Marines onto a planet's surface from orbit. The Dreadclaw assault boats are usually deployed from Chaos Battleships and Cruisers engaged in a planetary assault. These starships will usually bombard the landing zone before the Dreadclaws touch down, clearing them of any opposition.

The Dreadclaw is also intended for use in ship-to-ship boarding actions and is outfitted with two sets of grappling claws that allow the Dreadclaw to securely attach itself to the hull of an enemy starship, after attaching it begins cutting through the ship's hull with a ring of powerful melta-cutters located inside the machine's maw.

After cutting through the hull, a process that takes only solar minutes, the Dreadclaw opens its air-tight iris hatch and allows its cargo of Chaos Space Marines passage into the enemy ship. The Dreadclaw is intended as an all-purpose assault boat that can deliver either a squad of up to ten Chaos Space Marines, up to five Chaos Terminators, or a single Chaos Dreadnought to combat for both ground assaults and ship-to-ship fleet actions.

The Dreadclaw operates much like its present Imperial counterpart. During a planetary assault, it hurtles through the atmosphere like a man-made meteor until at a certain pre-determined altitude, its retro-rockets kick in and slow its descent to a speed survivable by Astartes (though not necessarily by normal humans).

The Dreadclaw does not extend its main claw arms until it has landed and is ready to begin deploying its troops, since the arms' mechanisms are delicate and could be damaged by the impact or the heat of atmospheric entry. Once on the ground, the assault boat's main hatch irises open and the squad or Chaos Dreadnought steps out on the surface. The four claws then extend, driving the Dreadclaw's armoured bulk upwards and revealing its deadly contents, who begin combat operations in their typically savage fashion.

Unlike Imperial Drop Pods, the Dreadclaw is an assault boat, which means that it is fully capable of lifting off and leaving a planetary atmosphere or a warship's surface again, so that it can be used to extract Chaotic troops from a planetary surface or boarding operation as well as deliver them.

The Anvillus Pattern Dreadclaw Drop Pod was initially designed during the Great Crusade to insert Legion Space Marine boarding forces onto enemy void-craft in the midst of battle. As such they had a minimal profile and a heavily armoured hull designed to survive fire from smaller ship-based close defence weaponry, while a series of melta cutters allowed it to slice through a ship's outer hull and deliver its cargo into the heart of a vessel.

Unlike some earlier boarding craft, which were incapable of returning their cargo to friendly ships, the Dreadclaw was also fully capable of operating as an independent dropship. Indeed, many Legions favoured using the Dreadclaw in this role instead of the more common Storm Eagle, dropping from the sky like a flaming comet and employing the craft's thermal jets and melta cutters to scorch the landing zone clean before disembarking the assault troops contained within.

Though lacking in any subtlety or elegance, this tactic was undeniably effective, and many crew had developed a dark notoriety for their skill at reckless low altitude strafing runs, leaving great swathes of the enemy's lines aflame with each pass.

Before the Horus Heresy began, the Anvillus Pattern Dreadclaw Drop Pod was one of the most advanced assault boat in service with the Space Marine Legions or the fleet of the Imperial Army during the Great Crusade. However, its design by the Adeptus Mechanicus was flawed.

When the Dreadclaw's on-board cogitator was interfaced with the extensive array of navigation Auspexes and logic engines present on an Imperial starship, its Machine Spirit began to develop a dangerous and unexpected level of self-awareness. The launch bays and maintenance decks of Imperial warships outfitted with complements of Dreadclaws began to suffer from a suspiciously high number of fatal accidents and malfunctions, which, despite the reassurances provided by the Mechanicus Tech-priests, soon lead to rumours that the Dreadclaws' Machine Spirits were cursed in some way.

Once the Heresy began, the number of such fatal incidents on starships that were part of the Loyalist forces increased exponentially and led to many Imperial starship captains simply jettisoning their entire complement of the assault boats into the cold vacuum of space. The Dreadclaws present on Traitor vessels did not suffer nearly as many problems.

In fact, after the end of the Heresy and the retreat of the Traitor Legions into the Eye of Terror, the Dreadclaws became as warped by constant exposure to Chaos energies as the rest of the Chaos Space Marines' equipment and vehicles. The malevolence of these assault boats' Machine Spirits has only grown, though now they serve the agenda of the Ruinous Powers.

Dreadclaws today can be said to positively revel in the taking of the lives of those dedicated to the service of the False Emperor. The original Forge World which designed the Dreadclaw was eventually purged from Imperial records.

The Dreadclaw is an unarmed transport vehicle used by the forces of Chaos to quickly deploy their forces to a planet's surface or to an enemy starship. The Dreadclaw's only feature that could be considered a weapon is its Melta-cutter, which is able to cause only minor damage to a starship by cutting access points into its hull so its cargo of Chaos Space Marines can depart and board the vessel.

The Dreadclaw is, however, capable of being outfitted with external Frag Assault Launchers, which will fire a blast of fragmentation charges to protect itself from any enemy infantry that gets too close while the Dreadclaw is on a planet's surface.

Many of the Traitor Legions prefer sudden and brutally-enacted assaults that can shatter the morale and unit cohesiveness of an Imperial or xenos enemy that is often numerically superior to them. Such attacks serve a double purpose: the elimination of strategic targets and a rapid closing with the foe that allows Chaos Space Marines to rend their foes apart in the bloody melee combat that so many of them simply relish.

One way that these assaults are carried out is using the formation known as the Dreadclaw Talon. This tactic uses the Dreadclaw assault boat to deliver a hand-picked force comprised of up to four Chaos Space Marine squads, including Chaos Terminators or Chaos Dreadnoughts, into combat mere moments after a Chaos warfleet unleashes a devastating orbital bombardment.

Moments after Lance fire and torpedo strikes clear their landing zone, the Traitor Marines will land and unleash their firepower on the stunned defenders to take their objective or kill important enemy personnel. This tactic was used most memorably during the Battle of Ironholm in the Gothic War (12th Black Crusade) when a warband of the World Eaters deployed the Killing Hand Dreadclaw Talon into the heart of the Imperial Guard's defensive lines.

Lord General Kolke and his entire command staff were slaughtered on the end of the Khornate Berserkers' Chainaxes, destroying the Imperial defenders' command and control and striking a devastating blow against their morale all in one swoop. This assault ultimately turned the tide of the battle in the favour of the servants of the Blood God.

The Dreadclaw has a transport capacity of 10 or can be used to transport a single Dreadnought.

The original technical specifications of the Dreadclaw have been either lost or purged from Imperial records. 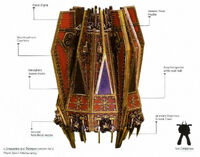 Technical Specifications of the Dreadclaw, with a Chaos Space Marine nearby to show a size comparison.

A Chaos Dreadclaw of the Tainted Chaos Space Marine warband.

A Chaos Dreadclaw of the Skulltakers Chaos Space Marine warband.

A Chaos Dreadclaw, showing both a side view and a ventral view of the Dreadclaw's iris hatch. 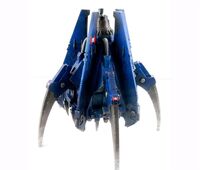 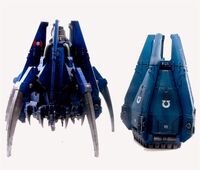 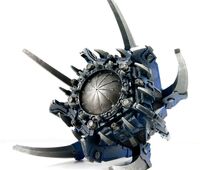 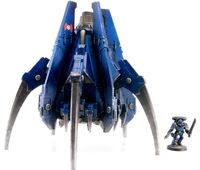 Size comparison; Anvillus Pattern Dreadclaw Drop Pod and a Night Lords Legionary.
Add a photo to this gallery
Retrieved from "https://warhammer40k.fandom.com/wiki/Chaos_Dreadclaw?oldid=355345"
Community content is available under CC-BY-SA unless otherwise noted.