"Chainswords and axes! Rend them limb from limb!"

A chainaxe is a brutal hand-to-hand chain weapon crafted in the form of a great one or two-handed axe which incorporates a powered chainsaw edge. The biting action of the whirling row of monomolecular teeth means these weapons can hack through both flesh and armour with ease.

The chainaxe is the favorite weapon of the Khornate Berserkers found in the ranks of the Chaos Space Marines and of worshippers of the Blood God in general.

"You fool! Do you truly believe that crude axe can best the finest weapons of the Hollows?"

During the time of the Great Crusade in the late 30th Millennium, the chainaxe was a standard close combat weapon used by the Legion Assault Squads of the Legiones Astartes, finding special favour amongst the Legionaries of the World Eaters Legion. The XIIth Legion's preference for close quarters fighting and dealing death face-to-face was demonstrated by the preponderance of close combat weaponry habitually carried by its rank and file.

The dedicated assault units of the Legion added to their profusion of bloody killing tools a weapon that dated back to the techno-barbarian tribes of Terra, the broad-bladed chainaxe. With the rediscovery of the Primarch Angron as the XIIth Legion's rightful master, the World Eaters' predilections for hand-to-hand bloodletting reached even greater heights than before, and the chainaxe was further refined under Angron's direction.

Such was the reputation it gained, particularly given its effectiveness against brutish xenos such as the Orks, that its use spread to several of the other Astartes Legions. In truth, this inelegant weapon could be seen as an abstract symbol of the World Eaters themselves: brutal and savage, remorseless and unsubtle, a tool with but one purpose -- to kill.

After the Traitor Legions fell to the corruption of Chaos during the Horus Heresy, the chainaxe became synonymous as the preferred weapon of the Khornate Berserkers who began to rise in every Legion, as the axe was the sacred weapon of Khorne himself. Khorne cares not from where the blood flows, and it often flows easiest when his followers make use of the endless multitude of melee weapons found throughout the galaxy.

After the Heresy, the chainaxe found less use amongst the Loyalist Space Marine Chapters, perhaps because of its increasing association as a weapon preferred by devotees of the Blood God. However, the Astartes of some assault-oriented Loyalist Chapters like the Flesh Tearers have still been known to make use of the chainaxe on occasion.

Like Orks themselves, Ork melee weapons are large, extremely durable, and very dangerous. They can range from simple lengths of bare metal or sections of deck plating, to highly complex but highly unpredictable mechanisms that only an Ork would dare use. No matter their form, each can multiply an Ork's already high degree of lethality to even greater levels:

An Imperial chainaxe of an unknown pattern, Flesh Tearers Chapter

A chainaxe of an unknown pattern, Black Legion Traitor Legion

A Legion chainaxe of an unknown pattern

A Legion chainaxe of an unknown pattern

An Ork Big Choppa of the Evil Sunz klan

An Ork Big Choppa of the Goffs klan 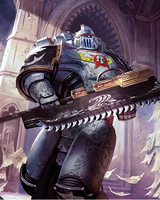