Capable of obliterating infantry formations in a thunderous rain of mass-reactive explosions and whirling Tempest Warblade, or carving apart light vehicles with ease, the Castigator is a formidable opponent.

The Cerastus Knight-Castigator is a favoured Knight pattern by those households who are often faced by an overwhelming number of the enemy. Armed with the fearsome Castigator-Pattern Bolt Cannon, the Cerastus Knight-Castigator is capable of annihilating infantry formations and light vehicles with it's twin-linked main weapon in a hail of gunfire, or carving apart enemy armour with it's formidable power weapon, the Tempest Warblade.

Notably amongst their ilk, the Castigator is also renowned for the stoic nature of their machine spirits within, whose vigour is difficult to rouse, but almost impossible to ignore. Castigator mark armours are often claimed by a Household's more venerable scions, those warriors of proven mettle who can be relied on to hold the line, conserve their limited stock of ammunition and support their more vainglorious kin, often forming the core of any Household's Arbalester order. Some younger scions are also drawn to the Castigator, glorying in the armour's deafening firepower and elegant warblade strikes, though such scions rarely deign to act as mere support units. 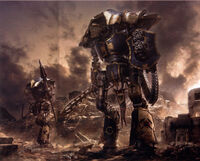 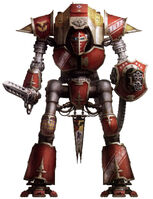 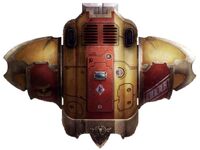 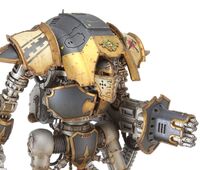 A close-up view of the front of a Cerastus Knight-Castigator
Add a photo to this gallery
Retrieved from "https://warhammer40k.fandom.com/wiki/Cerastus_Knight-Castigator?oldid=336418"
Community content is available under CC-BY-SA unless otherwise noted.