Ceramite is a form of heat and shock-resistant ceramic material that is widely used throughout the Imperium of Man.

Ceramite is capable of absorbing and dissipating even the most extreme thermal and directed-energy attacks, and conducts many other forms of electromagnetic radiation in such a way as to disperse it across a wide area. This makes ceramite especially effective at providing protection against directed-energy and particle-based weapons.

An inexpensive and sturdy building material widely used across the Imperium consists of pulp wood formed around a core of low-grade ceramite. This material is used for the construction of the low-cost prefabricated housing blocks prevalent on many Imperial Hive Worlds. 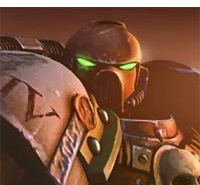