"Merrick, a Guardsman's life is to die. My job has always been to send them where they can die. I'm not afraid to spend men, but I never waste them!"

Lord General Castor was a general officer of the Astra Militarum who served the Inquisitor Adrastia during the Third Aurelian Crusade.

He hailed from the Fortress World of Cadia and led several Cadian Shock Trooper regiments, including the famous "Castellan's Own" -- the Cadian 8th Regiment -- to restore order in Sub-sector Aurelia.

The Greater Daemon Ulkair and the Black Legion were defeated by the Blood Ravens Chapter on the Chaos-controlled world that had once been the sub-sector capital planet of Aurelia during the Second Aurelian Crusade.

The Black Legion did not retreat after their defeat but instead allied with either the Renegade Blood Ravens Chapter Master Azariah Kyras or the Chaos Lord Eliphas the Inheritor to bring destruction to several planets in Sub-sector Aurelia.

Due to the Chaos incursion, the conflict between Blood Ravens still loyal to the Imperium and those who fell to the Chaos influence of Azariah Kyras, continued Aeldari raids and the remnants of the Tyranid splinter fleet that had once ravaged Typhon Primaris, the sub-sector fell into ruin, disorder and turmoil.

To make matters worse for the Loyalists, several regiments betrayed the Emperor and swelled the ranks of the forces of Chaos due to its continued influence upon them.

Before the Exterminatus fleet arrived in the sub-sector to carry out its mission, an Inquisitor of the Ordo Hereticus named Adrastia was requested by Gabriel Angelos of the Blood Ravens Chapter to investigate their Chapter Master for heresy.

If Azariah Kyras could be removed, and with him the stain of Chaos plaguing the region, the people of the Aurelian Sub-sector could be spared their looming execution.

During Adrastia's investigation, she requested help from Lord General Castor. Castor agreed, with Sergeant Major Merrick, Commissar Lord Bern, and a force of guardsmen and Storm Troopers accompanying him on the Inquisitor's investigation and helping save the sub-sector from destruction in what became known as the Third Aurelian Crusade. 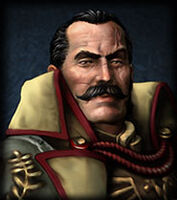