The Knight-Castigator pattern is used by those Knight Houses who are often faced by an overwhelming number of the enemy. The Castigator Bolt Cannon features two rapid-firing, rotary Bolt Cannons twin-linked together, and is capable of annihilating infantry formations and light vehicles in a thunderous hailstorm of mass-reactive shells.

Castigator Knights are usually piloted by a Knight House's most venerable Scions, those who are skilled and trustworthy enough to conserve the Castigator's limited supply of ammunition, which is stored on the Knight's back in an armoured container, with an armoured feed line supplying it to the cannons. 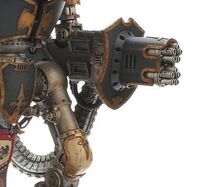 A Castigator-Pattern Bolt Cannon, left side view
Add a photo to this gallery
Retrieved from "https://warhammer40k.fandom.com/wiki/Castigator_Bolt_Cannon?oldid=336535"
Community content is available under CC-BY-SA unless otherwise noted.