The Castellax-class Battle-Automata is the most common pattern of the widespread Castellan-type Battle-Automata in service to the mysterious Legio Cybernetica and serves as a general robotic battle unit developed during the Great Crusade from its ancient forebear.

Primarily intended for siege work and shock assaults, the Castellax Battle-Automata is a hulking humanoid machine with a notoriously aggressive and responsive Machine Spirit, and an enviable reputation on the battlefield. The Castellax, employed in units of one to five robots by the Legio Cybernetica, has a standard configuration of Bolter and Bolt Cannon armament that allows it to serve in a potent infantry support role.

The most common Castellan-type Robot in service with the Imperium is the Castellax-class. Developed from its ancient forebears, it was primarily intended for siege work and shock assaults. The Castellax Battle-Automata is a hulking humanoid machine thrice the height of a man, with a notoriously aggressive and responsive Machine Spirit and an enviable reputation on the battlefield.

Its armoured endoskeleton is proof against small-arms fire and highly resistant to damage thanks to its durable design and the presence of the same Atomantic Shielding technology that features on the Legiones Astartes Contemptor Pattern Dreadnought. The Castellax, employed in large numbers by the Legio Cybernetica, has a standard weapons configuration of Bolter and Mauler Bolt Cannon armament, and is able to maintain a punishing barrage of firepower as it advances.

Rarer configurations, however, included Battle-Automata equipped with Flamer weapons or the arcane and powerful Darkfire Heavy Photon Thruster Cannon. During the Great Crusade and Horus Heresy, many Solar Auxilia cohorts and Legiones Astartes units went to war accompanied by attached Cybernetica maniples. Some were bonded by compacts forged in the crucibles of war, and the Battle-Automata even bore the same colours and heraldry as the auxiliaries or Space Marine Legions themselves.

The Castellax-class was a mainstay both of the Legio Cybernetica and the elite defensive formations of many Forge Worlds, who relied on its formidable power for their protection. Some in the Imperial hierarchy saw the steady increase in the number of these war machines as a sleeping threat to the supremacy of the Imperium should the Mechanicum ever default on its treaty of mutual support with the Emperor. History was to take a different course, and in a few short standard years with the outbreak of the Horus Heresy, thousands of these war engines would be broken on the wheel of war, and the Castellax was never to be seen again in such numbers. 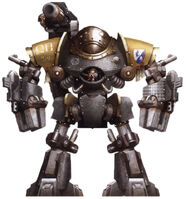 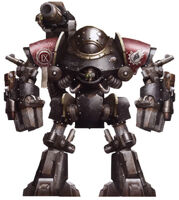 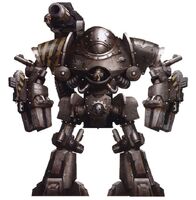 Iron Warriors Legion-bonded Castellax-class Battle-Autmata, Lambda Three Six; this robot was permanently bonded to the Iron Warriors, and bears the functional heraldry of the IVth Legion, such as the distinctive yellow and black chevrons and a simple asset identifier 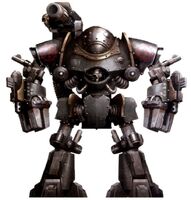 Castellax-class Battle-Automata, Cyclothrathine Taghmata that was part of Archmagos Draykavac's assault on Numinal; the icon on the right shoulder bears post-Istvaan Traitor iconography, while the left shoulder bears the arachnid-glyph signifiers of its home Forge World; also note the kill markings in the form of skull symbols on the arms 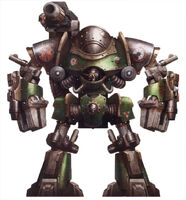 Castellax-class Battle-Automata Delta-9, of the Cohort Magenim, Maniple Epsilon-957; deployed to Sylator Province, Battle of Calth; the sigil of the Magenim sect of the Legio Cybernetica is on the right shoulder pauldron; on the opposite plate is an example of the unique unit indentification system 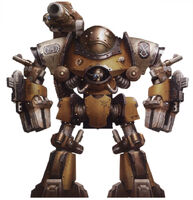 Castellax-class Battle-Automata, Unit 10, Taghmata Xerxes, Second Taghma, 43rd Maniple; this robot was sent from Accatran to join the muster at Calth; it fought alongside Loyalist forces during the Battle of Calth; this robot retains stark utilitarian heraldry, despite fighting alongside countless storied units 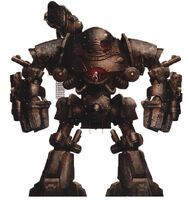 An unidentified Castellax-class Battle Automata of the so-called Xana II Revenant Legion that was damaged beyond repair during the conflict on Istvaan V, yet somehow was able to operate independently during the Xana Incursion 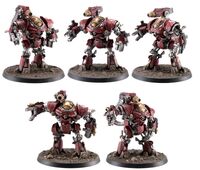 A Cohort of Castellax-class Battle Automata
Add a photo to this gallery
Retrieved from "https://warhammer40k.fandom.com/wiki/Castellax-class_Battle-Automata?oldid=340461"
Community content is available under CC-BY-SA unless otherwise noted.