"There is no greater transgression than to betray the Emperor's will; for a normal man there may be atonement for such a sin in death, but for a member of the Astartes, even the grave cannot hold suffering enough to pay for this crime."

Carab Culln is the former Lord High Commander (Chapter Master) of the Red Scorpions Space Marine Chapter and a current Relic Leviathan Dreadnought. Known throughout the Imperium, he is a warrior of great courage and battle experience who has fought the enemies of Mankind across the breadth of the galaxy. Renowned as an inspirational leader of unimpeachable bravery, Carab Culln had the honour of being selected as Magister Militum (supreme commander) of the Loyalist Space Marine forces during the internecine conflict known as the Badab War from 904.M41 until 912.M41. During his baptism of fire as a Chapter Master during this conflict, he preferred to lead the major actions of the war from the front, earning the respect and admiration of his peers. Like all of the Red Scorpions he believes in absolute genetic purity, and is extremely wary of any association with Abhumans, mutants, xenos or anything that deviates from the pure baseline human form.

In the wake of the Great Rift's birth, Culln was feared lost to the Imperium during the campaigns that followed the Indomitus Crusade. In a stroke of good fortune, his mortally wounded remains were returned to the Chapter and interred within the sarcophagus of a Relic Leviathan Dreadnought. He fights alongside his brethren once more, now known as Carab Culln the Risen.

Carab Culln was inducted into the Red Scorpions Chapter shortly after his birth on the isolated Feral World of Zaebus Minoris. After he was transformed into an Astartes during his adolescence, Culln's record of service to his Chapter proved to be exemplary. From a raw Neophyte and Scout Marine he rose steadily through all the ranks of his Chapter and numerous campaigns by displaying steadfast dedication to the Red Scorpions' uncompromising creed through his great fortitude and uncommon valour. Becoming something of an icon to his Chapter over his years of service, Culln is a veteran of some of the most terrible wars and battles in the Red Scorpions' recent history. He fought in such infamous campaigns as the Siege of Vraks against the Forces of Chaos as Veteran Sergeant of the Red Scorpions' Vanguard Veteran squad of the elite 1st Company, as well as against the Tyranids during the doomed exploration of the Anphelion Project by the Inquisition, surviving where lesser individuals, both mortals and Space Marines alike, would have fallen. During that ill-fated mission to Beta Anphelion IV, his actions earned him and his Chapter the ire of some factions within the Ordo Xenos, but to others this stalwart warrior and the Astartes of the Red Scorpions represent the Space Marine ideals of military might, moral purity and devotion to duty.

As a Veteran Sergeant, Carab Culln was awarded the highest honour his Chapter could bestow, the Talisman Martial, for taking field command and battling through to victory against the daemons and warped followers of Slaanesh. Some years later it came as little surprise that he was appointed as Lord Commander (Captain) of the Red Scorpions' elite 1st Company following the death of Commander Usamlon in battle against Ork marauders aboard the Space Hulk Vulgator. As his Chapter defines such things, Culln has grown forthright, proud and above all fiercely loyal to the Red Scorpions Chapter. For this reason Culln was viewed as the natural successor of Lord High Commander Verant Ortys, the Chapter Master of the Red Scorpions.

During the Badab War, Culln's transition to the position of Lord High Commander and Magister Militum after the death of Verant Ortys on the world of Grief at the hands of the Renegade Astral Claws was greeted with wide acclaim by his Battle-Brothers and most importantly blessed by the Chapter's Chief Librarian Sevrin Loth, who oversaw the change of command and quelled any dissent. Culln's ascension had been contested primarily by the Fire Hawks Chapter Master, Stibor Lazaerek, who demanded that he instead should be granted overall command of the Loyalist forces in the conflict due to his seniority and long, honourable service to the Imperium. As Ortys' successor, Culln was entitled to step into the mantle of his predecessor as Magister Militum and overall commander of the Loyalist forces, but this was by no means guaranteed. With the principal support of the Raptors and Salamanders Chapters, as well as his own impassioned pleas in the Loyalists' war council that he had the right of vengeance and the proven mettle required to see the war to its end, Culln secured the support of the Fire Angels and Novamarines for his command. Both the Sons of Medusa and the Marines Errant Chapters then agreed to his selection for reasons of their own. Despite some continued minor dissent, Carab Culln was acclaimed as the second Magister Militum of the Imperial Crusade to retake the Maelstrom Zone from the Secessionists.

During the rest of the Badab War, Lord High Commander Culln proved to be a surprisingly superb strategist despite his previous experience as only a line officer, and he displayed an aptitude for applying the various skills and modes of warfare of the diverse Space Marine Chapters under his command, deploying them where the Loyalist forces would best contribute to victory in accordance with their Chapter's nature and specialty. He also successfully delegated responsibility to his field commanders to act autonomously as they saw fit when detached from his immediate command and control. This propensity to delegate served Culln well when dealing with fiercely independent individuals or notably fractious Chapters such as the Sons of Medusa or the Minotaurs. In accordance to the highest traditions of his Chapter, Culln led several key assaults in which the Red Scorpions were heavily engaged and refused to disguise his presence or shun the thickest fighting, despite being a high value target for the enemy on any battlefield that he fought upon.

Formerly the Lord High Commander of the Red Scorpions Chapter, Carab Culln was believed lost to the Imperium in the campaigns that followed the Indomitus Crusade. Grievously wounded in the slaying of the Great Beast of Sarum, Culln's remains were returned to the Chapter, bearing only the faintest whisperings of life. Thus in honour he was interred within the armoured shell of a Relic Leviathan Dreadnought, blessed with the technology to allow Culln to serve his brethren in battle once again as Carab Culln the Risen.

The following wargear was used by Carab Culln before he was implanted within the shell of a Leviathan Dreadnought. 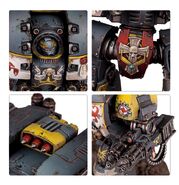 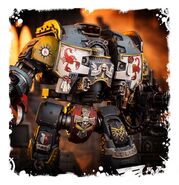 The Red Scorpions Relic Leviathan Dreadnought Carab Culln the Risen prepares to meet the foes of the Emperor in battle once more after his resurrection
Add a photo to this gallery
Retrieved from "https://warhammer40k.fandom.com/wiki/Carab_Culln?oldid=314236"
Community content is available under CC-BY-SA unless otherwise noted.